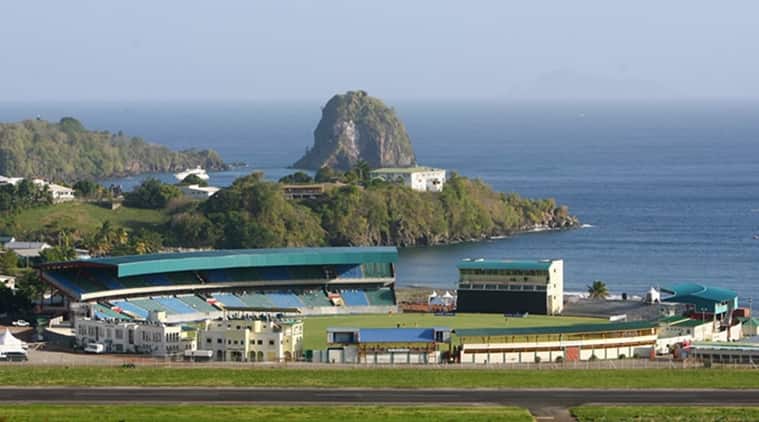 For the best part of the last three days at the nets, former West Indies quick Nixon McLean has been trying to kick an old habit: rubbing the cricket ball with saliva. “You’ve done this all your life, each time you have the ball in your hand. It’s a habit. So the hand goes automatically towards the tongue when you get the ball in your hand,” he admits.

It’s a habit most cricketers — the bowlers and ball-shining designates especially — have to ditch after the ICC prohibited the application of saliva to maintain the ball in the wake of the Covid-19 pandemic. Not just this practice, McLean and Co have been unlearning a slew of other old habits and etiquettes too, like handshakes, hugs and high-fives, and internalising news ones like maintaining social distance when celebrating, washing hands with sanitisers ever so often and not borrowing teammates’ bats or gloves.

“It’s kind of strange, you get a wicket and run immediately to your teammates. It’s instinct. But all that is not possible. But at least cricket is back,” says McLean, coach of Botanic Gardens Rangers, one of the six franchises in the Vincy Premier League, a T10 tournament that would roll on for 10 days from Friday in the tiny and picturesque East Caribbean island of Saint Vincent and the Grenadines.

The league, if one discounts the Vanuatu Premier League, is the only instance of competitive cricket since the pandemic outbreak that suspended most sporting activities in the world. Understandably, McLean is excited: “The cricket world will be tuning into us. So, we are naturally excited. The little island will be in the limelight for once.”

SVG, or the “small island” as they call it in the Caribbean, is a necklace of 32 islands, of which only nine are inhabited with four of the nine being private resorts, having a total area of 369 square kilometre and population of 110,000. Like most East Caribbean islands, the COVID-19 devastation has been nominal here. Till date, only 18 persons have been infected, of which 14 have recovered.

It has been a cricketing outlier too — primarily a limited-overs haunt – with the Arnos Vale Sporting Complex not hosting any international fixture since a Test against Bangladesh in 2014. International cricketers too have sprung sparsely — only nine from the island have played Test cricket for the West Indies. They don’t have a team in the Caribbean Premier League either.

“But the stadium is one of the most beautiful in the world. It’s so close to the Caribbean Sea and I remember people seeing (Brian) Lara hitting a few into the sea. The atmosphere is usually great, a lot of music and drums in the stands,” McLean says.

Whether the stands will sway to soca and reggae is unsure as the timing of the VPL is odd — the matches (30 in 10 days) begin at 8.30 in the morning, catering to Asian viewers more than the locals. Besides, the crowd is regulated too. “We could not obviously deny crowd from entering the stadium as there is no lockdown or other prohibitions in our country. So, we kind of reduced the number of tickets and instructed strict social-distancing practices while watching the game. Every spectator will be screened and their temperature measured. Also, because the matches are in the morning, we don’t expect too much of a crowd,” says Kishore Shallow, president of the local cricket association.

But a sparse crowd is better than no crowd, sighs McLean. “It will be quite bizarre to play in an empty stadium. Even domestic matches here get a decent turnout. The other day, I watched a Bundesliga match and felt quite odd. We can’t imagine that. So, a bit of a crowd, seeing people in the stands, it’s so heart-warming. And expect a lot of noise and cheering,” he says.

READ | No to saliva, yes to sweat: ICC and its match-ball rules

While the beach-hugging stadium is not a bio-secure bubble ­unlike Ageas Bowl or Old Trafford in England — the organisers are conforming to most safety protocols. Like buses ferrying players from their houses to the stadium and back — it helps that most of the 80-odd players, officials and staff live on the island — the players will have to wear masks all the time except when they are on the ground and will have to keep sanitising their hands. “Every day, there will be a temperature check before the match and after it. Players and the support staff will be closely monitored for symptoms, if any. As most of them have not travelled outside the country in a fair while, they don’t need to be quarantined. Overall, we are following standard health procedures, and there will be a large medical team overseeing them, in case something goes amiss. If it’s a success, the world will appreciate us,” says Shallow.

It would be a huge advertisement for local talent, as Vincentian players comprise the entire league. The big draws are obviously capped Windies players like exuberant opening batsman Sunil Ambris, pacer Kesrick Williams (he of the Virat Kohli fame), up-and-coming left-arm seamer Obey McCoy and highly-raved batsman Gidron Pope. “I tell some of the youngsters in the team, the world is watching, show them your talent. There are a lot of promising players around, and it will be a great opportunity for them,” says McLean, who is the coach of the country’s team too.

But before they start putting their talent on display, they need to unlearn a few old habits and internalise new ones.

Tim Paine on future: Will see after this series, having chats with Langer and Hohns