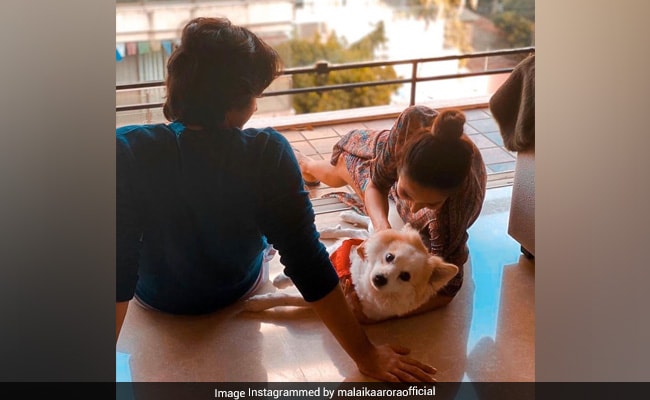 Malaika Arora with Arhaan and their pet. (courtesy: malaikaaroraofficial)

A few days ago, Malaika shared a collage on her profile, which had a picture of herself juxtaposed with a photograph of her sister Amrita Arora’s pet pooch AXL. In the pictures, Malaika and the pet could be seen wearing similar turbans. Malaika wore a pristine white one while AXL’s turban had some bold prints on it. Malaika captioned the post: “I think AXL and me are twinning. Amrita Arora, why is your pet copying me?” She added the hashtags #lockdownfashion and #wethinkalike.

Malaika Arora and film producer and actor Arbaaz Khan, who were married for 19 years, are parents to Arhaan. They got divorced in 2017. Arbaaz Khan is currently dating Italian model Giorgia Andriani, while Malaika Arora is dating Bollywood actor Arjun Kapoor.

On the work front, Malaika Arora was last seen as one of the judges on the TV reality show MTV Supermodel Of The Year, alongside Milind Soman and designer Masaba Gupta.