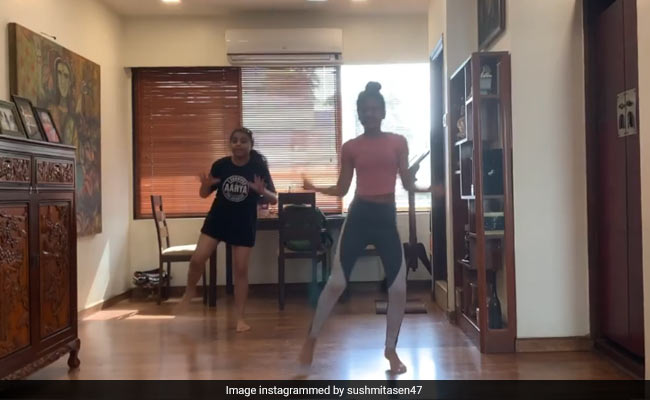 A still from the video that Sushmita Sen shared. (Image courtesy: sushmitasen47 )

Actress Sushmita Sen, on Tuesday, shared a scene from her “play date” with her daughter Alisah and the 11-year-old’s friend Alexa. The actress posted a video of Alisah and Alexa dancing to a song that was choreographed by Alisah’s friend and called them her “girl gang.” Sushmita captioned her post like this: “Super-talented Alexa and Alisah. We are a girl gang, like birds of a feather. Lockdown with a flying spirit! So much to learn from children…exercise happiness, no matter what! After all, it’s nothing but a choice! A week-long stay over #playdate with two of my favourite #girlgang. Alexa choreographed the song and taught Alisah how to roll! Too cute these two!”

Sushmita Sen recently featured in web-series Aarya. In the show, she plays the role of Aarya Sareen, a happily married woman whose world turns upside down when her husband is shot. Some revelations about her husband’s business after his death put her in a tough spot and she decides to save her family by picking up the gun and jumping straight into the murky business that her husband was a part of.

Earlier, talking about her role in Aarya, Sushmita Sen told news agency PTI: “There is a lot of me in Aarya. As a mother, I am very protective about my children. I am not a fussy mother. I can be a task mom and so is Aarya and that aspect has been brought by Sushmita into Aarya. There is a lot of fight in Aarya which is again something that I have abundantly in me.”

Aarya, which is available on Hotstar+Disney, marks Sushmita Sen’s first Hindi project after the 2010 film No Problem. The actress, who is also a former Miss Universe, has featured in a number of Bollywood films such as Biwi No 1, Zor, Ram Gopal Varma Ki Aag, Filhaal, Main Hoon Na, Main Aisa Hi Hoon, Dulha Mil Gaya and Maine Pyaar Kyun Kiya?.

ICC umpire Anil Chaudhary is now a ‘hero’, resolves network problems in his village amidst pandemic