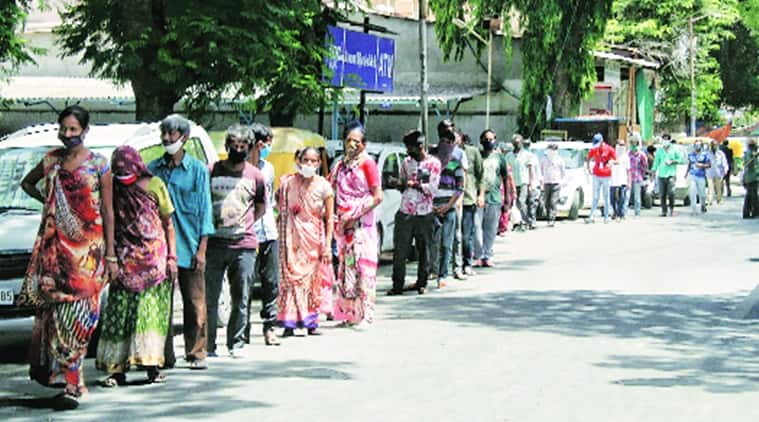 
People outside banks in Ahmedabad and Rajkot to collect application forms to avail loan under Aatmanirbhar Bharat scheme on Thursday. (Javed Raja and Express)

Serpentine queues were seen at many places in the state on Thursday as applicants queued up to collect forms for Gujarat government’s three-year loan scheme — Aatmanirbhar Gujarat Sahay — where collateral-free loans up to Rs 1 lakh will be give at two per cent interest.

“The response on the first day of the launch was very good. Over 36,000 forms have been distributed by the banks,” said Manish Bhardwaj, secretary, animal husbandry, fisheries and cooperation.

According to the government, the applications are free of cost and it aims to reach out to 10 lakh self-employed persons under the scheme. While the loan costs just 2 per cent annual rate of interest, the state government will give 6 per cent interest to the banks on the loans.

Long queues of loan applicants were witnessed outside branches of Rajkot Nagrik Sahkari Bank in Rajkot city as well. “There was heavy rush of applicants… The forms we had were insufficient. We have uploaded copy of the form on our website,” a spokesperson for the bank said.

Another Khalistan flag crops up in Punjab, 3rd in 10 days