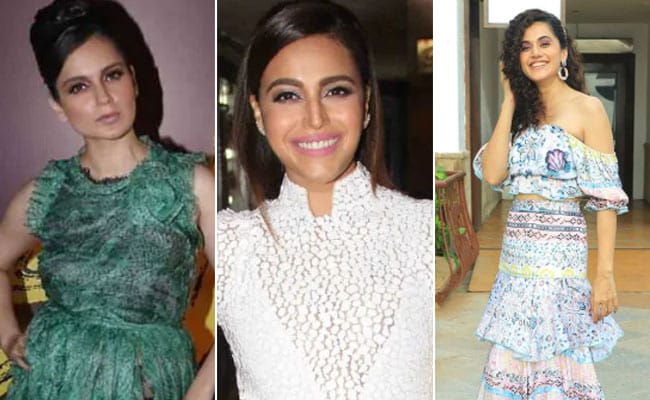 Simmering tensions between actresses Kangana Ranaut and Taapsee Pannu boiled over into a firestorm this week with Swara Bhasker also taking a leading role. It began with Kangana, 33, dismissing her colleagues as “needy outsiders” and “B-grade actresses” while appearing on a news channel. Swara Bhasker responded on Twitter, as did Taapsee Pannu who also spoke to Hindustan Times and described Kangana Ranaut’s comments as “disheartening.” Perhaps inevitably, social media has taken sides – #NationStandsWithKangana has been trending on Twitter all day; support for Taapsee and Swara have poured in from several quarters, including journalists and some Bollywood voices.

First, here’s what Kangana Ranaut said about nepotism in the film industry and actor Sushant Singh Rajput’s death last month, allegedly by suicide: “I only have to lose here, because tomorrow they (referring to the ‘movie mafia’) will get some 20 needy outsiders like Taapsee Pannu and Swara Bhasker who will say ‘oh only Kangana has a problem with Karan Johar, but we love Karan Johar.’ If you love Karan Johar, why are you both B-grade actresses? You are better looking than Alia Bhatt and Ananya, you both are better actresses, why don’t you get work? Your existence is a proof of nepotism. What are you telling me how happy you are with this industry?”

Taapsee Pannu and Swara Bhasker were swift to respond with wry tweets:

” -Needy outsider
– B grade actress
(But) – better looking & better actor than Alia Bhatt & Ananya!”
Net net I think this was a compliment!
Thanks Kangana! I think u are gorgeous, generous & a great actor ! Shine on #KanganaSpeaksToArnab#Nepotism@KanganaTeamhttps://t.co/fIg4i3Lz5F

Speaking to Hindustan Times, Taapsee said, “It’s disheartening to see someone making a mockery out of outsiders and the industry that has given us so much. Imagine the parents whose kids are coming into the industry. What will they think of us? Like we are some nasty evil people sitting here to eat outsiders?”

Swara’s Twitter is filled with retweets of people who have weighed in, like director Anubhav Sinha, and also posts such as this one:

Okay so while on topic.. full disclosure & confession.
I am needy.
I need respectful public interaction.
I need rationality and logic in debate.
I need sane, civil and decent public discourse.
I need rule of law.
and I need FACTS !
What do you need? #NeedyOutsider

When you talk like that you are D-grading yourself.

Kangana Ranaut’s attack has to be considered in the light of previous comments made by the actress and her sister about those named in her comment on national TV. To begin with, Bollywood was split wide open when Kangana called filmmaker Karan Johar “the flag-bearer of nepotism” a couple of years ago on his show Koffee With Karan. KJo, son of producer Yash Johar, regularly casts star-kids such as Alia Bhatt, Varun Dhawan and Janhvi Kapoor in his productions. In the month since Sushant Singh Rajput died, public anger has focused itself anew on Karan Johar for having been dismissive of the late actor on his show and also having allegedly led a supposed boycott against Sushant.

Taapsee Pannu and Kangana Ranaut go back to last year when Kangana’s sister Rangoli Chandel called Taapsee a “sasti copy” of Kangana on her now-suspended Twitter account. Taapsee’s crime – having failed to name Kangana Ranaut in an appreciation tweet for the trailer of the actress’ film Judgementall Hai Kya? It prompted an extraordinary rant from Rangoli, who also attacked filmmaker Anurag Kashyap for telling her that she was “going too far, this is really, really desperate” and that “praising the trailer means praising all aspects of it.”

Grades apart, all three actresses have, between them, been part of several quality cinema made in the last few years. Kangana Ranaut has three National Awards to her credit for Fashion, Queen and Tanu Weds Manu Returns and was last seen in the sports film Panga; Taapsee Pannu has starred in hard-hitting dramas such as Mulk, Pink and Thappad; Swara Bhasker, who co-starred with Kangana in the Tanu Weds Manu films, was singled out for praise in films such as Nil Battey Sannata and Anaarkali Of Aarah.

Sponsored – Crime And The City: Lalbazaar Is Your Next Binge Watch