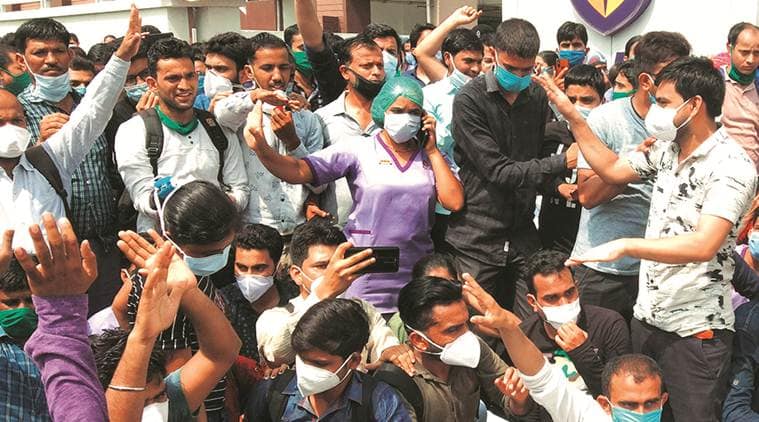 AN HOUR after several contractual nurses at one of Gujarat’s frontline coronavirus-designated hospitals went on strike to protest against pay cuts, the decision was reversed on Monday. Later in the day, the Ahmedabad Municipal Corporation (AMC) declared the staff of contractual and outsourcing agencies working in six of its hospitals as “designated Covid-19 staff”, bringing them under its purview.

The nurses had gone on strike at AMC-run SVP Hospital. One of them told The Indian Express that some of the senior nurses received an internal communication several days ago notifying them of an impending 10-20% salary cut. “Some of us who were expecting, say, Rs 35,000 for May received Rs 22,000. We work endlessly without complaining, risking our lives, spending up to 12 hours in PPEs without relieving ourselves and even during our periods. They take an account from us for every triple-layer mask, taking our signatures for every little thing, and yet they cannot pay our salaries?” a nurse said.

Around 1,700 staff members at SVP Hospital, including nurses, technicians, paramedical staff and guest relation executives, are sourced from a private company, Updater Services Ltd (UDS), headquartered in Chennai. Praful Jain, project head at UDS, said, “The whole world is going through an economic recession, so a decision was taken for salary optimisation. Cuts were planned for a quarter or so, after which they would have been reviewed… But now that decision has been rolled back.” While refusing to specify the salary cuts, Jain admitted that around 300 nurses would have been impacted.

As per the order issued by AMC Commissioner Mukesh Kumar, contractual staff who now come under the corporation will continue to work where they are deployed. “Further, no service conditions shall be altered adversely without prior permission of the AMC,” the order states.

Among those who criticised the pay cut was the ruling BJP. Spokesperson Bharat Pandya said, “The company which has taken this decision is incapable and inhumane.”

One of the nurses at SVP Hospital said she joined UDS after the hospital called for more staffers to tackle Covid-19. “They first said those on Covid duty will be paid Rs 500 a day additionally as incentive. Then they reduced that amount to Rs 250. Some received it, but I did not. I did not get a salary cut because I’m a junior staff but this is just frustrating… at night, we work 12 hours. Many are facing kidney problems as they are unable to go to the toilet for hours.”

SVP Hospital CEO Ramyakumar Bhatt said, “Around 30-40 staffers participated in the strike. We shall be penalising UDS for a pay cut during such times… This penalty amount will be used to pay additional 20% salaries for June.”

He denied that they had not paid the incentive, saying it had been paid for April while May dues would be paid by Monday evening. — Inputs from Ritu Sharma

Health disparities prove to be multidimensional

MGNREGA Must Be "Scaled Up" To Help Migrants, Congress Tells Centre