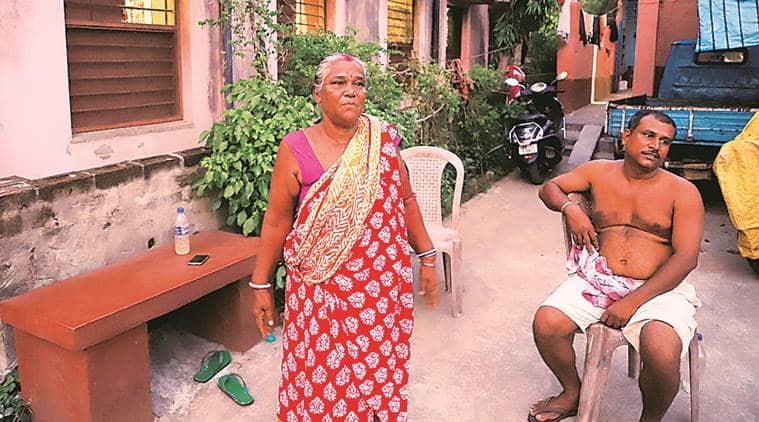 The list goes on. But an investigation by The Indian Express revealed that Kalipodo Das exists only on paper and these beneficiaries are all unrelated. And all the three own concrete houses that withstood the cyclone.

That’s just one symptom of the string of alleged irregularities in the manner in which these lists have been prepared.

Investigation of official records and visits to homes in Uluberia in Howrah, one of the worst hit by the cyclone, shows how one man came to be listed as the father of nine beneficiaries from different families and different faiths in a panchayat; how what are dismissed as “typing errors” has left entire villages distressed; and, how the dead come back to life on official records for compensation.

Nearly two months after the natural disaster left the districts of Howrah, North 24 Parganas, East Midnapore, South 24 Parganas and Sundarbans devastated, many of the affected struggle to pick up the pieces.

On Wednesday, The Indian Express reported how relatives of politically powerful members of Gram Panchayats, Panchayat Samitis and Zilla Parishads in these districts were approved for compensation even if there’s no damage to their homes while deserving applicants wait. And about glaring irregularities in the way money has been paid — or claims cleared.

In Uluberia’s Kalinagar, it’s not just about one name. In another series of entries on the official list of beneficiaries — from Masiar Rahaman Mullick to S K Matleb — Tarun Pramanik has been listed as “father”. Also on the list of recipients is Sheikh Nazrul, who died in October 2017 at the age of 49.

Jahirul with a photo of his father, a beneficiary, who died three years ago (Express Photo by Partha Paul)

These are just some of the errors, bizarre and baffling, which, Opposition leaders point out, provide the cover of deniability to recipients in case of scrutiny.

“My father died three years ago. I don’t know how his name came in the list. We have not applied for compensation,” says Nazrul’s son Jahirul, pulling out his father’s death certificate.

Jahirul’s mother Ajmira says her husband’s passbook was “with the bank” after his death. “After his name came up for compensation, the panchayat member’s husband took me to the bank and I got the passbook back. But I am yet to get any money,” she says.

Two minutes away, Khodeja Begum is bewildered. “My sister Suraiya Parvin has been listed as a beneficiary at this address. Suraiya died 15 years ago. She used to live at her husband’s house, this is her paternal home. I don’t know what is happening. We have not applied for anything from the government. Ask the panchayat, they made the list,” says Begum.

Cyclone Amphan swept through a slice of West Bengal on May 20, and by the beginning of June, the state government had released relief and reconstruction funds. This included Rs 2,400 crore in house-building assistance to 5 lakh people that covered Rs 20,000 in direct transfers and Rs 28,000 per person as wages equivalent to 100 days work.

In villages across Uluberia, this has left residents dissatisfied and triggered a political firestorm. Claims former panchayat member and Forward Block leader, Jahirul Alam Mullick: “These errors were done intentionally so that no one can easily identify the beneficiaries. There are no anomalies in the bank account numbers where the money went.” Officials are yet to release the list of those who have been paid.

The ruling party says it has taken note. “This type of irregularity is not acceptable. The party will take stern action and root out corruption,” says Rajib Banerjee, Forest Minister and Howrah district TMC leader.

The Block Development Officer (BDO) was not available for comment. According to an official at the BDO’s office, which processed the lists received from panchayats, the mismatch was a result of “clerical and typographical errors”. “We conducted reviews and published fresh lists,” says the official.

Back in Kalinagar, standing outside her two-storeyed concrete house, Meena, wife of Surajit Sadukhan, says: “My father-in-law’s name is Anil Sadukhan, not Kalipodo Das. I don’t know how that name came up, and we don’t know any person by that name. I am not aware whether any money has come into my husband’s account.”

Says another beneficiary Dipali Mondol, who is also the owner of a two-storeyed concrete house: “A tin shade on the roof was damaged and we applied for compensation but I have no idea how my father’s name was given as Kalipodo Das.” Mondol declined to reveal whether she had received the compensation money.

“The asbestos roof got damaged. But I did not apply for compensation. The panchayat member surveyed the area and may have given my name to the BDO office,” says Uttam Bera, a third beneficiary and owner of a single-storeyed concrete house. “My father’s name is Nemai Bera, not Kalipodo Das,” he says.

In fact, local residents have put up posters of the panchayat member and her relatives, claiming they were the real beneficiaries.

“The panchayat member came here and took pictures of our house. She promised us that we will get compensation. But when the list was published, our names were not there,” says Hosenara Begum.

Panchayat member Mahrufa Begum was not available for comment. Speaking on her behalf, her husband Dahijul Mollah directed all queries to the BDO. “There has been a small mistake and the names of dead people have come up. But all genuine people have got their names in the compensation list,” says Mollah.

Important For India, EU To Work Together To Use Technology Benefits: PM

Two new variants of SARS-CoV-2 not reason for surge in cases in Maha, Kerala: Govt