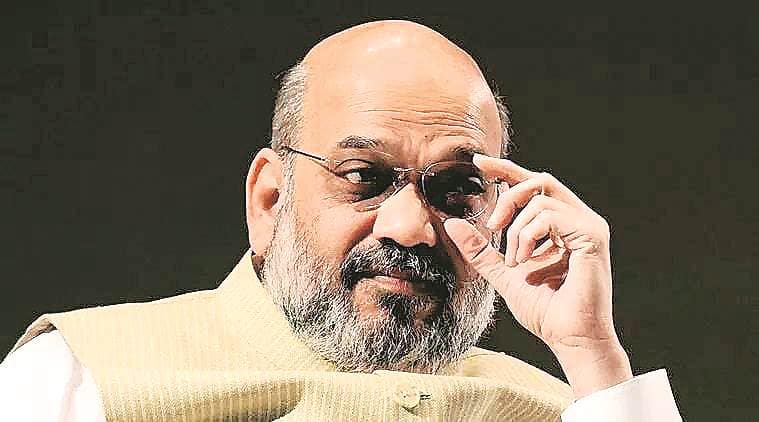 
The BJP claims nearly 5 lakh party workers would listen to Shah’s speech on YouTube, Facebook Live and on the Namo app. (File)

Catching its political opponents napping, the BJP has announced that Union Home Minister and former BJP chief Amit Shah would address party workers at approximately 72,000 booths to reach out to its cadres and workers through a virtual rally on Sunday.

The BJP claims nearly 5 lakh party workers would listen to Shah’s speech on YouTube, Facebook Live and on the Namo app. The event is being touted as a formal launch of the electoral process in Bihar, which is scheduled to go to the Assembly polls in October-November this year.

Opposition RJD and Congress, however, took on the saffron party for going in “election mode” at a time the battle against coronavirus is yet to be won in a state where cases are still rising – as of Saturday evening, more than 4,500 positive cases.

Bihar BJP president Dr Sanjay Jaiswal, however, said Shah’s virtual rally is a way to digitally address the cadres, Bihar BJP spokesperson Nikhil Anand told The Indian Express: “Sunday’s virtual rally would be a culmination of our two-month-long efforts to make our cadre – down to the booth level – tech-savvy. Almost all our key functionaries use smartphones and are now familiar with Zoom meetings and party WhatsApp groups. Our state president had held a video meeting at levels of mandals and shakti kendra in groups.”

Anand said, “While it was not possible to meet our workers during lockdown, our cadres at every level remained activated. There had been some activity or the other through digital channels (even) during the lockdown.”

Asked what the focus of Shah’s virtual rally would be, Anand said he could speak on the achievements of the second Narendra Modi government in its first year, and how the Centre has tackled the Covid challenge.

Asked whether it is right to go on election mode at a time Bihar is still in the grip of the pandemic, Anand said: “The virtual rally is a bid to stay connected with the party at the base level. Let the Opposition interpret it the way they would like to.”

RJD spokesperson Mrityunjay Tewari said: “Our leader Tejashwi Prasad Yadav has also held Zoom meetings; we also have WhatsApp groups, but we are not thinking of elections like the BJP is. We stay connected to help migrant workers, some of whom have also become our party members.” Denying that BJP is the only party making a digital outreach, Rashtriya Lok Samata Party president Upendra Kushwaha added he, too, did Facebook Live sessions to take up the issue of migrants workers.

Congress party secretary Chandan Yadav said, “While the BJP has gone in election mode, as is reflected through its digital connectivity, our top leaders are connected (with the people) through WhatsApp, and we have run several campaigns against mismanagement of the coronavirus crisis by the Bihar government.”

Yadav pointed out that a set of 13 questions asked by the party of Shah on social media platforms is trending on Twitter.

Among the Congress’s key questions are how the BJP can think of elections during the pandemic, and why half the posts of doctors are vacant even after its leaders held the Health portfolio in the NDA government in the state for 13 years.

RJD should try to get Nitish in Oppn fold: Manjhi

Patna: Former Bihar CM and Hindustani Awam Morcha (Secular) president Jitan Ram Manjhi on Saturday told reporters RJD leadership should take along all constituents of the opposition alliance in the state and try to bring Nitish Kumar in the Grand Alliance fold. HAM(S) spokesperson Danish Rizwan told The Sunday Express: “There has been no discussions on seat-sharing so far. It is high time the RJD takes initiative. Manjhi also reiterated his suggestion of making attempts to bring Nitish to the GA.” ENS

Shehla Rashid’s estranged father levels allegations against her, demands probe against her NGOs