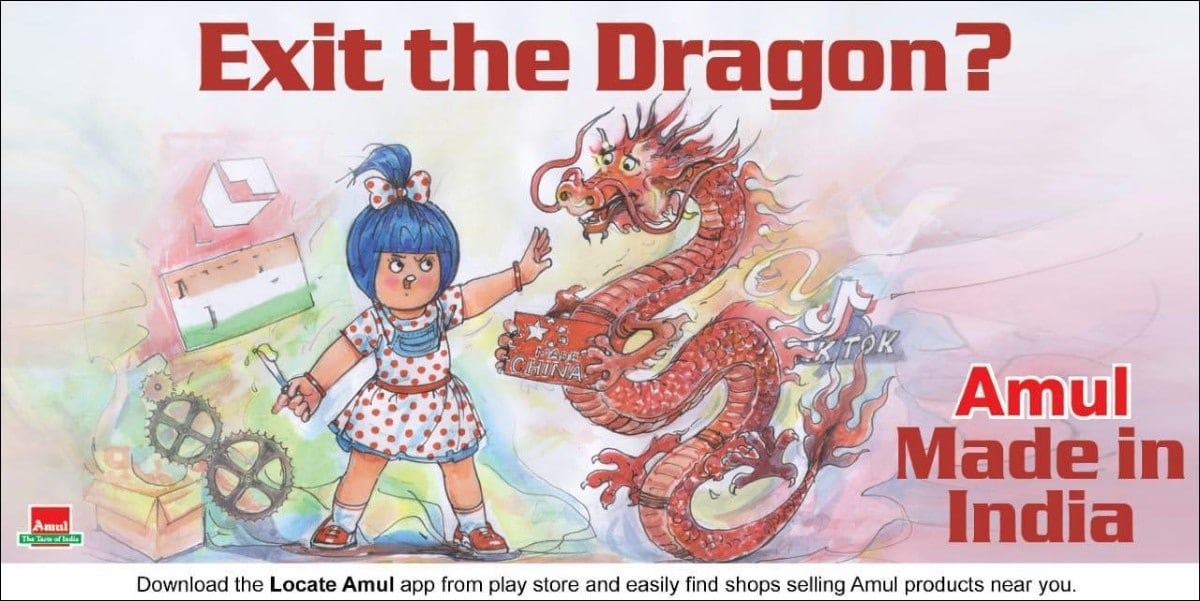 The Twitter account of the Gujarat Cooperative Milk Marketing Federation, owner of the Amul brand, was blocked briefly after it posted a cartoon apparently calling for a boycott of Chinese products. GCMMF Managing Director R S Sodhi said that Twitter blocked its handle @Amul_Coop after its advertising agency posted a cartoon featuring its mascot “Amul girl” with the caption “Exit the Dragon?” on Thursday night.

In the bottom right corner, the advertisement had the words “Amul Made in India”. The cartoon appeared to support the new policy of “Atmanirbhar Bharat” enunciated by Prime Minister Narendra Modi as well as a call for a boycott of Chinese products on Indian social media against the backdrop of a stand-off between the two countries in eastern Ladakh.

Amul’s Twitter handle could be accessed when checked on Saturday afternoon and the post containing the cartoon was also visible. “We do not know why the account was blocked as we have not received any official statement from Twitter….Amul has not run any campaign against anybody,” Sodhi said.

“Amul girl campaign is on since last 55 years, and our mascot generally talks about topical subjects, reflecting the mood of the nation in a funny way,” Sodhi said.

“When our advertising agency shared this ad on the night of June 4, they learnt through a forward that our Twitter account was blocked. When we requested Twitter for re-activation, the account was restored,” he said.

“When we learnt about this, we asked for clarification. We do not know why this disruption occurred. We have not yet received any official message from Twitter on this,” he said. Meanwhile, #Amul began to trend on Twitter with thousands of users coming out in the company’s support and accusing the microblogging platform of a bias against India.

“Fantastic by @Amul_Coop. The dragon and their slaves got scared that they restricted the account. Imagine when our Army will be knocking Chinese doors,” said Twitter user Raj.

Most of 51 new South Korea cases linked to door sales