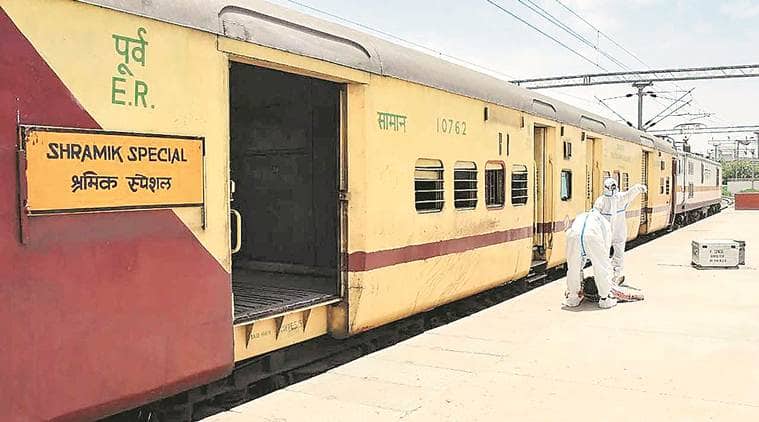 
Officials wearing protective suits carry the body of a passenger who was found dead in a Shramik Special train from Mumbai, in Varanasi, Wednesday. At least six persons on Shramik Specials were found dead at different stations in Uttar Pradesh. (PTI Photo)

“Once the train crosses into Telangana, KCR (Chief Minister K Chandrashekar Rao) will give us beer and biryani,” said a migrant labourer sitting next to me on the Surat-Warangal Shramik Special train. I laughed, others laughed too. It was funny, the way he said it. By then, it had been around 14 hours since we set off from Udhna station near Surat, and most of us had barely eaten. The thought of home, biryani and beer lifted our spirits briefly.

I am from Hyderabad and have been studying Political Science at Central University of Gujarat in Gandhinagar. When the lockdown happened, our campus shut down and most people left, except for some of us in hostels. Meals were always a problem as the canteen was closed. Finally, three of us from Telangana — a batchmate, a PhD student and I — decided to leave.

We approached the nodal officer in Gandhinagar and managed to get slots for May 23 on a special train from Udhna, a suburb of Surat, to Warangal.

At 5.45 am on May 23, we left our hostel. The District Collector of Gandhinagar had arranged for a vehicle to take us to Ahmedabad. From there, five others joined us and we were sent to Udhna, where we were to be screened and given tickets for the journey.

The screening process took an hour or so. The heat was unbearable. From the screening centre, we were asked to board the bus again and taken to Udhna Junction. The 20-seater bus was packed – there were at least 40 passengers. Social distancing seemed to be a cruel joke. There were other buses like ours, all packed.

At the station, our driver got off, locked the bus and walked away. Each vehicle would be unlocked only when it was the turn of the passengers to be taken to the train. We waited for over two hours. The bus was a burning oven by then.

A young mother travelling with her infant, who was crying because of the heat and exhaustion, tried to soothe the child by singing a lullaby in Telugu. I was surprised when I heard her – she sang about the troubles they were facing and cursed the authorities.

While the price on our tickets said Rs 520, I had paid Rs 700. These things make you angry, but what can you do? All of us were desperate to get home.

Finally, our bus was unlocked and we were made to rush out into the station and herded into the train waiting at the platform. There was no method in the way people boarded the coaches. There were officials and policemen on the platform but nobody kept a count of how many people were in each coach. It was around 8.30 pm when I finally managed to get into one of the coaches close to the engine.

The coach had hard benches – not the rexine seats you usually see. Also, there were no berths and no seat numbers. Fights broke out, and bags were shoved into each other’s faces and under seats.

There was dust layered on the benches and the toilets were foetid. But when the train started, there was a sense of relief. Eventually, everyone found whatever little space they could and settled in.

I got a seat by the window and my friends sat beside me. In front of us, a group was fighting over seats. They stopped only when we offered to share our seat. So now, there were 5-6 people on a seat meant for three. I began to get anxious. What if I fall ill? And test positive for Covid? Was I putting my family at risk by travelling in these conditions?

Soon, the smell of food filled the compartment. Our university had given us some snacks, but those were long over. One of the passengers, Ravi, a textile worker in Surat, offered to share his food. We were touched.

After dinner, people sat around and chatted. By now, the fights were forgotten and most people spoke about home and families. But almost all of us wondered what would happen once we reached Telangana. Will we be allowed to go home? Or will we be told to go in for institutional quarantine? (Those arriving by trains to the state are being tested and sent home and being advised to self-quarantine).

It was time to sleep and people lay down wherever they could – some between seats, some in the aisle, others on seats. My friends and I sat up chatting for a while. Later, we took turns to sleep on our seat. It was difficult, but the thought of getting to Hyderabad and meeting my brother and aunt was comforting. My parents live in a village in Mahbubnagar district.

The following morning, people began crowding around the two washrooms in our compartment, but both were unusable. The toilets were flooded and the stench was unbearable.

At 9 am, the train stopped at Akola station in Maharashtra. Authorities handed out bananas and threw bottles of water across the platform. Again, scuffles broke out. I wondered why the authorities were behaving this way. It felt deeply insulting.

Sometime later, the train stopped again. It was the day before Ramzan and local residents came up to our train and offered us packets of coloured rice and biscuits. Another person offered to fill our bottles. We were happy and grateful.

Around 12.30 in the afternoon, at Balharshah station, railway officials handed out lunch – about 100 grams of khichdi and bottles of water – through the windows of each coach. Again, fights broke out.

Around 6.30 pm, our train reached Warangal station. Until then, I had thought of myself as being different from the crowd I was travelling with – mostly daily wagers. But this journey was a leveller. By the time we got off the train and stepped on to the platform, we all looked and felt the same – disheveled and exhausted, with only the thought of home to keep us going.

The post-journey screening took a little over an hour, but felt much longer, after which I was given a home quarantine stamp on my arm and loaded into a state transport bus for Hyderabad.

I reached home around 10.30 pm. I had called my brother and told him the quarantine precautions he needed to take. The bags that I brought from Gandhinagar are still unpacked and lying outside the house. Once my quarantine ends, I plan to meet my parents in Mahbubnagar.

(As told to Kedar Deshpande. Anand, a Master’s student at Central University in Gandhinagar, interned with The Indian Express)

COVID-19 vaccination priority: Centre asked to respond to plea to include people with mental illness