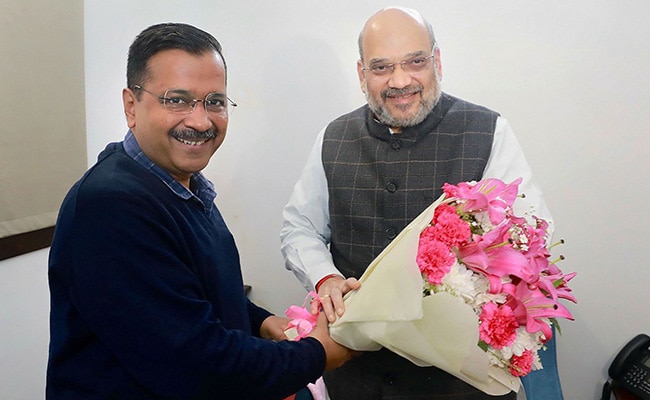 Delhi Chief Minister Arvind Kejriwal on Wednesday met Union Minister Amit Shah and discussed the coronavirus situation in Delhi which has seen a spurt in new cases in recent days. “He assured of all cooperation,” Mr Kejriwal tweeted.

The meeting, at Mr Shah’s residence, came a day after Mr Kejriwal tested negative for coronavirus after he went into self-isolation at his home following a bout of fever and throat pain.

Sources close to the Chief Minister said he is doing better now and does not have fever.

Met Sh Amit Shah, Hon’ble HM. Discussed the situation on corona in Delhi in detail. He assured of all cooperation.

Mr Baijal on Monday struck down an order by the Delhi government to reserve hospital beds for residents and allow tests for only people with coronavirus symptoms.

Mr Kejriwal had said the city would soon run out of beds if COVID-19 patients kept coming from across India to its hospitals, drawing criticism that he was being unethical.

Mr Baijal, who has frequently clashed with Mr Kejriwal and his leaders, said denying treatment simply because someone was not a resident of the capital would be legally impermissible.

Delhi has registered more than 1,000 new cases daily for the past few days as the government allowed a number of relaxations following two months of a nationwide lockdown.

The city has reported over 32,000 coronavirus cases, including 984 deaths, and has warned that the disease could overwhelming its healthcare system soon.

Deputy Chief Minister Manish Sisodia on Tuesday said infections will climb to 5.5 lakh by the end of July and it does not have the hospital capacity to handle such an outbreak.

The warning came as harrowing accounts of people struggling to get a hospital bed in the city emerged, including some who said their loved ones died on the doorsteps of medical centres which refused to take them in.

Despite a vast lockdown imposed in March, the disease is spreading in India at one of the world’s fastest rates as it re-opens a battered economy. Health experts say India’s peak could still be weeks away, if not months.

Any Decision On Bengaluru Lockdown Only After Consulting Experts: Karnataka Ministers