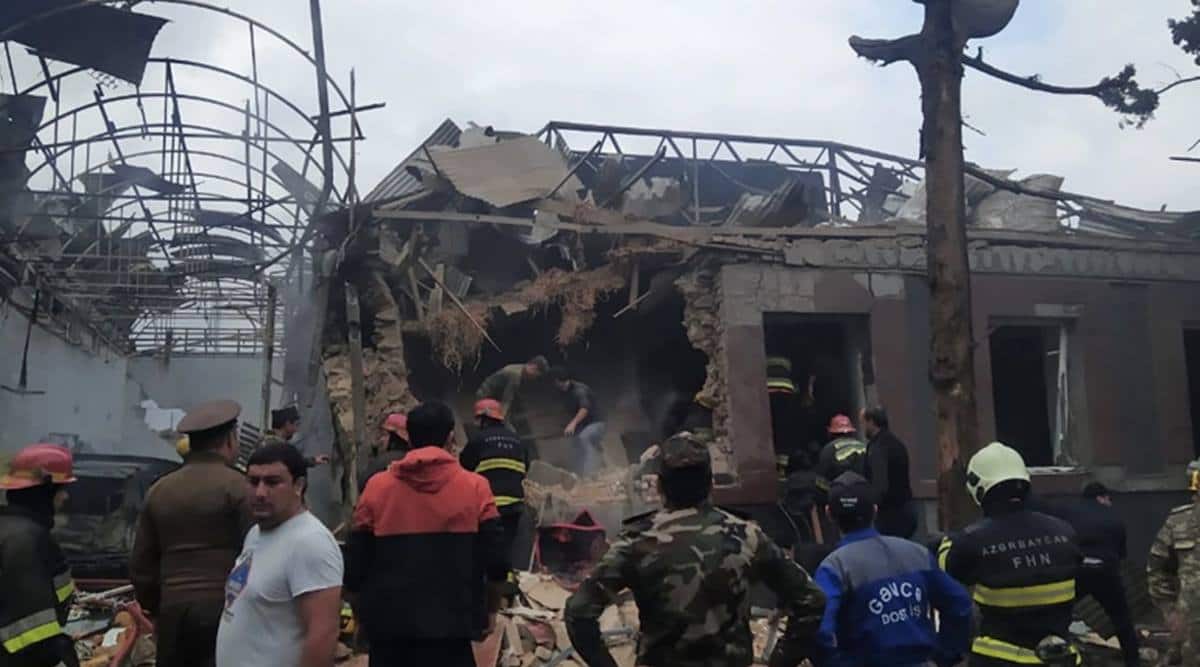 The fighting between Armenian and Azerbaijani forces continued on Sunday over the separatist territory of Nagorno-Karabakh, with Azerbaijan’s second-largest city coming under attack.

It wasn’t immediately possible to verify the authenticity of the video. Hajiyev said in another tweet that attacks on Ganja and other areas in Azerbaijan were launched “from territory of Armenia.”

Armenia’s Defense Ministry said that “no fire of any kind is being opened from the territory of Armenia in Azerbaijan’s direction.” But Nagorno-Karabakh’s leader, Arayik Harutyunyan, confirmed on Facebook he ordered “rocket attacks to neutralize military objects” in Ganja. His spokesman, Vahram Poghosyan, said the territory’s army destroyed a military airport in Ganja, a claim Azerbaijani officials denied.

The attack on the city killed one civilian and left four others wounded, the Azerbaijani Foreign Ministry tweeted. Harutyunyan said he ordered his forces to stop the attacks on Ganja to avoid civilian casualties. Nagorno-Karabakh’s leader added that “proportionate and crushing” strikes targeting the opponent’s forces would continue, if Azerbaijan fails “to draw appropriate lessons.”

The fighting, which broke out on Sept. 27 and has continued for eight straight days, is the biggest escalation in years in the decades-long dispute over Nagorno-Karabakh. The region lies within Azerbaijan, but is controlled by local ethnic Armenian forces backed by Armenia. Both sides said the hostilities have spread beyond the breakaway territory and accused each other of attacking areas outside Nagorno-Karabakh.

Ganja, with a population of more than 330,000, is located roughly 100 kilometers (about 60 miles) north of Stepanakert, Nagorno-Karabakh’s capital.

As the fighting resumed Sunday morning, Armenian officials accused Azerbaijan of carrying out strikes on Stepanakert and targeting the civilian population there. Nagorno-Karabakh’s leader Harutyunyan said that in response, his forces would target “military facilities permanently located in major cities of Azerbaijan.”

Nagorno-Karabakh officials have said nearly 200 servicemen on their side have died so far. Azerbaijani authorities haven’t given details on their military casualties, but said 22 civilians were killed and 74 others were wounded.

Nagorno-Karabakh was a designated autonomous region within Azerbaijan during the Soviet era. It claimed independence from Azerbaijan in 1991, about three months before the Soviet Union’s collapse. A full-scale war that broke out in 1992 killed an estimated 30,000 people.

By the time the war ended in 1994, Armenian forces not only held Nagorno-Karabakh itself but substantial areas outside the territory’s formal borders, including Madagiz, the village Azerbaijan claimed to have taken on Saturday along with several others.

This week’s fighting has prompted calls for a cease-fire from around the world. On Thursday, leaders of Russia, France and the United States — co-chairs of the so-called Minsk Group, which was set up by the Organization for Security and Cooperation in Europe in 1992 to resolve the conflict — issued a joint statement calling for an immediate cease-fire and “resuming substantive negotiations … under the auspices of the OSCE Minsk Group co-chairs.”

Azerbaijani President Ilkham Aliyev said that Armenia’s withdrawal from Nagorno-Karabakh is the sole condition to end the fighting.

Armenian officials allege that Turkey is involved in the conflict and is sending fighters from Syria to the region. Armenian Prime Minister Nikol Pashinian said earlier this week that “a cease-fire can be established only if Turkey is removed from the South Caucasus.”

Ankara has denied sending arms or foreign fighters, while publicly siding with Azerbaijan in the dispute.

On Sunday, Turkey’s Foreign Ministry condemned the attack on Ganja, saying it was proof of Armenia’s disregard for the law. Ankara accused Armenia of attacking civilian residential areas, and claimed that Armenia could commit crimes against humanity.

“Armenia is the biggest barrier to peace and stability in the region,” the ministry said.

Death toll of powerful earthquake in Haiti soars to 1,297

COVID-19 numbers in SE Asia plateaued over past month mainly due to cases in India remaining stable: WHO