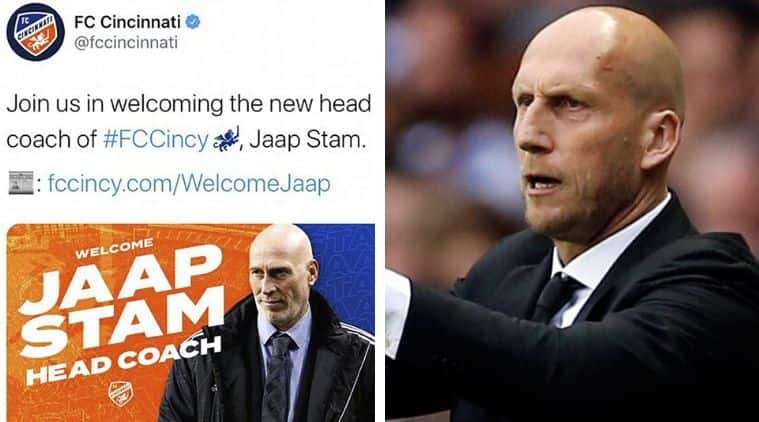 
“It’s happened before, but it was quite a big surprise yesterday,” Stam said Friday. (Reuters)

And it wasn’t the first time the coach with a shaved head has been confused with someone else who has the same look.

“It’s happened before, but it was quite a big surprise yesterday,” Stam said Friday.

The team announced his hiring Thursday on a tweet that mistakenly featured the photo of look-alike Tinus van Teanenbroek, an Ajax youth coach. Cincinnati soon retweeted the announcement with the correct photo, saying, “Join us in welcoming our actual new head coach, Jaap Stam.” The team wrote “actual” in italics.

Stam told the team’s website that he’s thankful for the attention the mistake brought to his hiring. He said he’s accustomed to such mistaken identity.

“A lot of people with no hair, in Holland, sometimes they say, ‘There’s Jaap!’” he said. “It’s a thing that’s quite normal.”

Other MLS teams picked up on the mistake and tweeted photos of other Stam look-alikes, which he enjoyed.

“Somebody posted it to me, and I can appreciate it as well,” Stam said in a Zoom call with the media Friday. “At a certain time, we need to have a little laugh as well. If we play against each other, if we come out on top by winning those particular games, then we can have a laugh, so that’s what we’re trying to do.”

Stam replaced Ron Jans, who was forced out in February after a league investigation found he’d used a racial slur in the locker room and made other troubling comments. The investigation was prompted by a complaint from the MLS Players Association.

Cincinnati is on its third head coach during its brief stay in the league. As an expansion team last year, it fired Alan Koch after its 11th first-tier match, which left Cincinnati with two wins, seven losses and two draws.

A central defender, he won three Premier League titles, one FA Cup and the 1999 Champions League with United.

Yuvraj Singh: BCCI treated me unprofessionally towards the end of my career