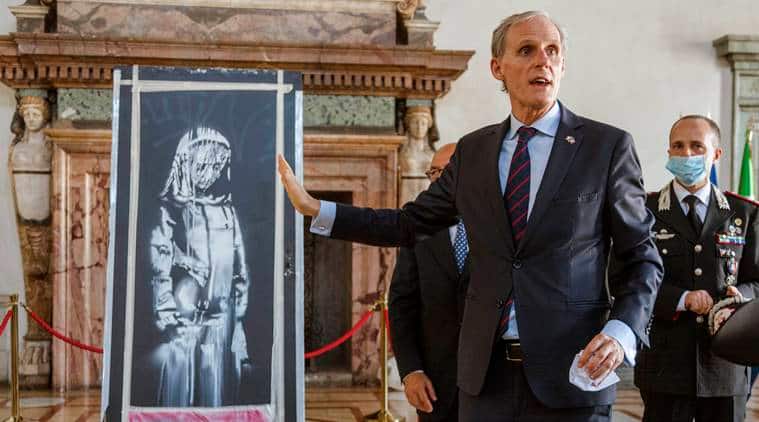 
French Ambassador to Italy, Christian Masset, receives from Italian prosecutors a recovered stolen artwork by British artist Banksy, depicting a young female figure with a mournful expression, that was painted as a tribute to the victims of the 2015 terror attacks at the Bataclan music hall in Paris, during a ceremony at the French Embassy in Rome, Tuesday, July 14, 2020. (AP/PTI)

Italy on Tuesday handed back to France a mural painted by British street artist Banksy which was stolen from the Paris Bataclan theatre, where militant Islamist gunmen killed scores of people in an attack in November 2015.

In June 2018, Banksy created a mural of a veiled female figure in a mournful pose on a fire-exit door of the concert venue where 90 people were killed in one of the coordinated attacks which caused 130 fatalities in the French capital.

The door, stolen in January 2019, was found last month in a farmhouse by the Italian police and given to the French ambassador in Rome on France’s most important national holiday, Bastille Day.

“It is a very moving moment to get back this door on our national holiday… it was witness to the massacre that claimed the lives of 90 people,” French Ambassador to Rome Christian Masset said during a ceremony at the embassy.

“Many people in the audience escaped through this emergency door. It has lived, heard and seen the whole massacre,” he added.

Banksy, whose real identity is unknown, has become one of the most well-known personalities of the modern art scene with a series of inspired works in public places that combine street art techniques with topical themes.

Last month, he published a new artwork online as people around the world protested the killing of George Floyd, the black American who died in Minneapolis after a police officer knelt on his neck for nearly nine minutes while detaining him on May 25.

On Tuesday, Banksy published on his Instagram account a video of a new art work installed on a London underground train titled “If you don’t mask – you don’t get” showing a sneezing rat.

China has all too often sought to ‘redraw’ Asia’s map without regard for its neighbours: US senator

Trump denies briefing about reported bounties on US troops