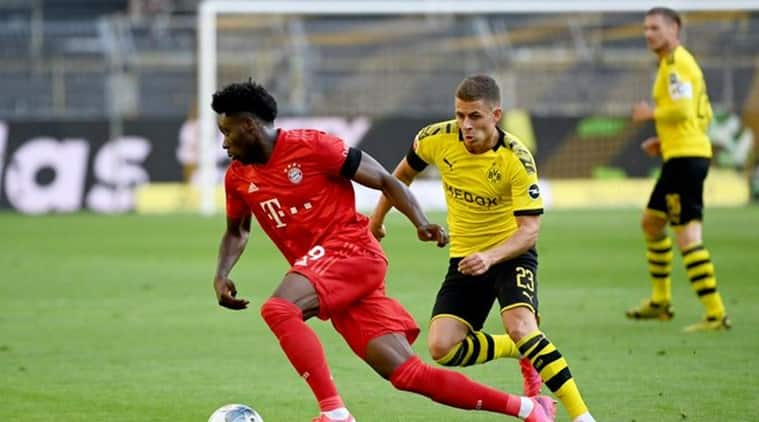 Joshua Kimmich’s sweet first-half lob gave leaders Bayern Munich a 1-0 win at second-placed Borussia Dortmund in the Bundesliga on Tuesday to close in on the league title with a seven-point advantage over their rivals and six games left in the season.

Kimmich sent a perfectly-weighted chip over stranded keeper Roman Burki in the 43rd minute as the champions landed a big win, at an empty stadium that normally seats 80,000 fans, in their quest for a record-extending eighth straight league crown.

Bayern, who have now won seven straight league matches, are on 64 points with Dortmund still on 57. RB Leipzig, who face Hertha Berlin on Wednesday, are third with 54.

“I do not live in the future. The here and now is important,” said Bayern coach Hansi Flick. “We wanted to win today and take a big step forward. We did that. We were focused, decisive and courageous at times. I am satisfied with my team.”

The Bundesliga restarted 10 days ago after a break of more than two months due to the COVID-19 pandemic, with games played without supporters to reduce the risk of infection.

It all started well for hosts Dortmund with teenage sensation Erling Haaland almost scoring in the opening seconds as Bayern’s Jerome Boateng had to clear the ball off the line.

The visitors found their footing and had their own effort cleared off the line when Lukasz Piszczek denied Serge Gnabry from five metres.

In a fluid and entertaining first half Norway international Haaland should have done better when he was sent through in the 33rd minute with Alphonso Davies stealing the ball away.

It was Kimmich’s delightful effort that settled the game when he superbly chipped the ball from the edge of the box over the keeper.

Dortmund lost Haaland, who earlier had another effort deflected wide by Boateng’s elbow, to injury with 18 minutes left and Mo Dahoud tried his luck from outside the box but visiting keeper Manuel Neuer, on his 400th league appearance, managed to preserve his clean sheet.

Team mate Robert Lewandowski hit the post in the 83rd for Bayern.

“I think that now it is only up to Bayern to decide the title,” said Dortmund defender Mats Hummels.

“We are seven points behind and can do nothing more than win our games. But we have to hope they slip up three times. We know how good they are.”

‘Keep fighting!’ Serena Williams yells herself to US Open win