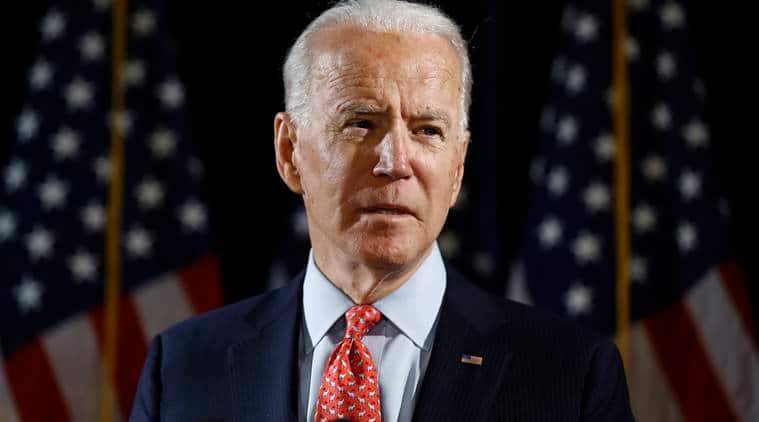 
The 77-year-old former US vice president is set to be formally nominated by the Democratic Party in August. (AP/File)

Democratic presumptive presidential nominee Joe Biden, if elected to power in the November elections, will help shape international bodies like the United Nations so that India get a permanent seat on the Security Council, a former top American diplomat has said.
India has been pushing for reforms of the United Nations, including the Security Council, stating that its composition doesn’t reflect the current realities and is not representative enough.

“There’s no question that under his (Biden) leadership, he would help shape international institutions like the UN to give India a (permanent) seat on the Security Council, he would fulfil its (India) status as a major defence partner,” former US Ambassador to India Richard Verma said on Saturday.

“He (Biden) would work together with India to keep our citizens collectively safe. That means standing up against cross-border terrorism and standing with India when its neighbours attempt to change the status quo,” he added.

Verma, an Indian-American who was US ambassador to India from 2014 to 2017, joined three other prominent Indian-Americans to make a strong pitch for the small but highly influential community to support and vote for Biden in the US presidential elections.

The 77-year-old former US vice president is set to be formally nominated by the Democratic Party in August. He will challenge 74-year-old incumbent President Donald Trump, a Republican in the November 3 presidential elections.

Verma, Biden Unity Task Force Economic Policy advisor Sonal Shah, former US surgeon general Vivek Murthy and Centre for American Progress Action Fund CEO Neera Tanden in their address to a virtual event argued that over the past several decades, Biden has a proven track record of being the best friend of Indians and Indian-Americans, be it as a Senator from Delaware or as a vice president under the Obama administration.

“There’s no question president Biden would build a more inclusive, tolerant just and fair administration that would take US-India relations to new heights,” Verma said at the event — ‘An Electorate Coming of Age: Indian Americans for Biden Community Town Hall’.

He urged the Indian-American community to make Biden’s dream of making India and the US the two closet nations in the world a reality.

“I can confidently say, there would have been no US India Civil Nuclear Deal but for Joe Biden,” Verma said.

“In 2006, I remember the remarks he made where he said, ‘My dream is that in 2020, the two closest nations in the world will be India and the United States. If that occurs, the world will be safer.’ Think about that for a second. He made those remarks in 2006. And here we are, it’s 2020. Let’s make Joe Biden’s dream a reality. That only becomes a reality if he becomes president,” he said.

In her address, Neera Tanden urged Indian-Americans to take steps every day over the next three-and-a-half months to ensure that Biden becomes the president.

Sonal Shah said she will vote for Biden as she wants a country that is open to people like her, to her friends, to her colleagues and to everyone else.

“We are not just immigrants, we are not just people sitting on the side, we are part of that American fabric and welcome us to help

create that fabric because we’ve been lucky enough to be able to do that. But it took people like Joe Biden to allow us and help us participate and give us those chances. We’ve benefited from that. So now I vote because I believe he is the right person, and we can build that country together with him,” she said.

According to Dr Murthy, Biden’s recognition and appreciation for immigrants and for communities like Indian-Americans is forming an incredibly important part of the backbone of the United States of America.

“This is a moment for our country when leadership matters, when values matter. When we go to the voting booth, as we think about how to build support for the candidate that will best reflect our vision and our hopes and our dreams. Let’s lead with our values. Let’s vote for the person who understands us,” he said at the event organised jointly by the Asian Americans and Pacific Islanders (AAPI) for Biden, the AAPI Victory Fund and South Asians for Biden.

Later in a statement, Ajay Jain Bhutoria, who is on National Finance Committee for Biden, said, “Most Indian-Americans would say without hesitation that Biden would be a better president and world leader and better for India on all counts.”

“The choice is clear for voting in November 2020. The choice is even clearer for Indo Americans and South Asians. Biden is the best answer for India and Indian-Americans. The Indian community sees him as one of ‘our’ leaders,” he said.

Cow Milk Or Buffalo Milk - Which One Is Better? An Expert Opinion