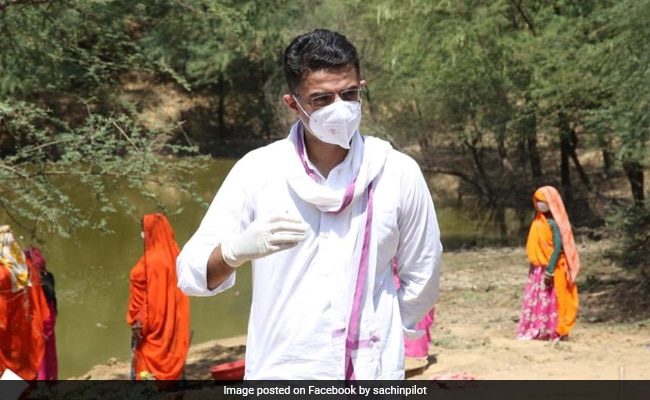 How a Sachin Pilot will fit into the matrix is a challenge the BJP faces.

As the Congress confronts a Desert Storm in Rajasthan where the fight between Ashok Gehlot and Sachin Pilot has escalated, the BJP is playing it by ear, say sources. The party has decided that the feud between the Congress top two, which offers fertile grounds for a coup, should run its course.

Sources in the BJP have told NDTV that they would like to wait and see how the Congress legislators’ meeting called by Rajasthan Chief Minister Ashok Gehlot plays out tomorrow morning. “The BJP’s next big step will be on the basis of absentees in that meeting,” said a source.

Three Congress MLAs seen to be loyal to Sachin Pilot seem to have wavered; they rubbished all talk of defecting, asserting that they remained Congress soldiers.

The BJP has done the math. It has 76 MLAs in the 200-member Rajasthan assembly and to form government, the party will need the support of at least 25 more MLAs. But the BJP is looking at an additional 10 MLAs as a buffer.

“If 30 to 35 of the Congress’s MLAs pledge their support to Sachin Pilot, the BJP will think of its next action plan for the state of Rajasthan,” the source said.

The BJP has given a veteran MP from Rajasthan, Bhupendra Yadav, the task of closely monitoring the developments. The chief architect of the BJP’s Madhya Pradesh takeover in March, Jyotiraditya Scindia, could also play a crucial role in liaising with his former colleague Sachin Pilot.

Earlier on Sunday Jyotiraditya tweeted on Sachin Pilot: “Sad to see my erstwhile colleague Sachin Pilot too, being sidelined and persecuted by Rajasthan Chief Minister Ashok Gehlot. Shows that talent and capability find little credence in the Congress”

The BJP is also exploring negotiations with the 10 independent MLAs who strongly support the Ashok Gehlot government for now.

Sources say the BJP’s strategy of caution is because of two factors — personality and numbers.

This is nowhere close to the situation in Madhya Pradesh, where the difference between the Congress and the BJP was wafer thin.

If it has the chance to form government, the BJP also has to contend with strong claimants for the Chief Minister’s post within the party — former Chief Minister Vasundhara Raje for one.

How a Sachin Pilot will fit into the matrix is a challenge the BJP faces. Ms Raje has had her share of run-ins with the central BJP leadership, but among MLAs in Rajasthan, she remains the tallest and most popular leader.

Sachin Pilot has been looking out since March, say sources, around the same time Jyotiraditya Scindia switched to the BJP.

BJP sources say if and when Sachin Pilot does agree to the terms offered to him, the party will expect that MLAs loyal to him will quit – just like it happened in Madhya Pradesh.

The BJP also plans to stress on a political vendetta angle against Chief Minister Gehlot by highlighting the arrest of two BJP leaders on charges of trying to lure Congress MLAs with money.

Hema Malini Reacts To Health Rumours: "I Am Absolutely Fine"