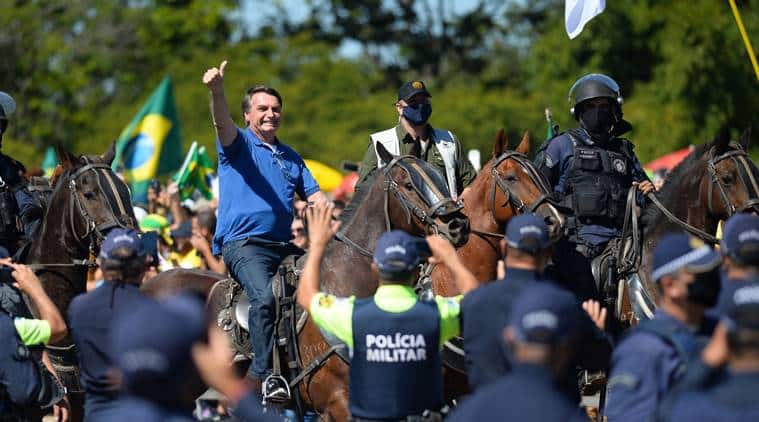 
Jair Bolsonaro during a demonstration in front of Planalto Palace in Brasilia on May 31.

Brazilian President Jair Bolsonaro joined supporters protesting against Congress and the Supreme Court in Brasilia on Sunday, stoking concerns of an institutional crisis in the nation that now has the world’s second-highest number of coronavirus cases after the US

In a live broadcast on social media, Bolsonaro greeted fans from a helicopter flying over the area where the demonstration was held. He then landed and joined the protest wearing no mask, despite a local government decree mandating them as a way to prevent Covid-19 spread.

Bolsonaro, a former army captain, also mounted a federal police horse in front of the protesters, who were carrying banners attacking the Supreme Court and even calling for military action against it and the Congress.

In other parts of Brazil, protesters against and for Bolsonaro clashed with each other and the police. In Sao Paulo and in Rio de Janeiro, anti-fascist and pro-democracy demonstrations were called by football fan groups, which clashed with Bolsonaro supporters. In Sao Paulo, the police lobbed tear gas bombs, and at least five protesters were arrested, local media reported.

The latest protests and Bolsonaro’s appearance to greet his supporters may fuel the institutional crisis that’s been brewing amid a fake news probe mandated by the Supreme Court. Last week, the federal police carried out search-and-seizure orders against people seen as Bolsonaro’s allies.

The President and the Supreme Court have been at odds on a number of issues, particularly after the court supported restrictive measures imposed by governors to slow the spread of the coronavirus, against the president’s push to reopen the economy.

The crisis worsened amid investigations allowed by the Court. Besides the probe into social media posts alleged to promote fake news and personal attacks, the court also authorized an investigation into accusations made by former Justice Minister Sergio Moro on the President’s alleged attempts to interfere with police investigations.

It’s all playing out as Brazil’s coronavirus crisis is spiraling.

Brazil surpassed France to rank fourth in the world in coronavirus deaths, with the total number of fatalities reaching 29,314 on Sunday, according to Health Ministry data. A month ago, Brazil had confirmed only about 6,000 deaths from Covid-19.

The number of infections totaled 514,849, trailing only the U.S. Confirmed cases have risen an average of over 19,000 a day over the past week.

The White House on Sunday said the US was sending Brazil 2 million doses of hydroxychloroquine, a malaria drug touted by President Donald Trump, and 1,000 ventilators.

Protests flare again in US amid calls to end police violence

Republicans splinter over whether to make a full break from Trump