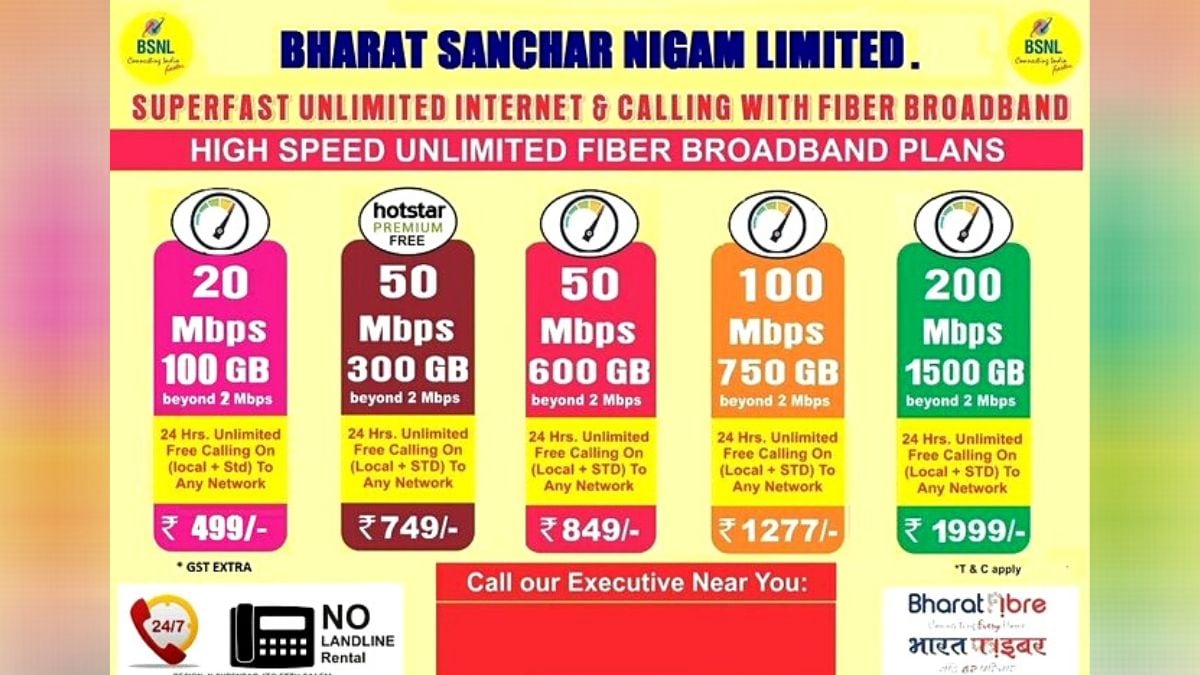 Bharat Sanchar Nigam Limited (BSNL), the state-owned telco, has extended its existing 1500GB FTTH plans to new cities in Tamil Nadu, after introducing it in only Chennai and Telangana circles earlier this year. The BSNL 1500GB Fiber-to-the-Home (FTTH) plan offers a speed of 200Mbps up to 1500GB data with unlimited local and STD calls to any network. After the FUP limit is reached, the speed reduces to 2Mbps. The 1500GB FTTH plan is also introduced in Bhawanipatna city in Odisha, as well as the Puducherry area.

According to a tweet by BSNL Junior Telecom Officer (JTO) N Surendar, the state-owned telco has introduced the 1500GB plan priced at Rs. 1,999 along with several other plans in cities of Tamil Nadu including Salem, Yercaud, Omalur, Mettur, Sankagiri, Tiruchengode, Attur, Valapady, Rasipuram, Namakkal, and Velur. Plans starting from Rs. 499 (20Mbps up to 100GB) till Rs. 1,999 (200Mbps up to 1500GB ) are available to use in these cities, as per the tweet.

Additionally, customers will also get free Hotstar Premium subscription with the Rs. 749 plan. All BSNL Bharat Fiber plans offer free Amazon Prime subscription of Rs. 999, however there’s no clarity on whether Rs. 1,999 plan offers the same benefit or not.

The broadband plans are also live on the BSNL Tamil Nadu site and the development was first reported by Telecom Talk. As mentioned, the plan was first introduced in Telangana and Chennai circles earlier this year, with a validity of 90 days only.

Meanwhile, the 1500GB Bharat Fiber plan along with other FTTH plans are also available in Bhawanipatna city in Odisha. The announcement was made on BSNL Bhawanipatna Twitter page. Telecom Talk notes that the 1500GB plan has been extended to Puducherry as well.

Notably, BSNL recently extended the availability of its Rs. 499 broadband plan that offers up to 40Mbps speeds to new circles in India including Kolkata and Sikkim. The state-owned telco had earlier extended its “[email protected]” promotional broadband plan for landline customers until June 20 owning to coronavirus pandemic.

Google's Pichai Tells Students to Be Hopeful in 2020 Commencement Speech