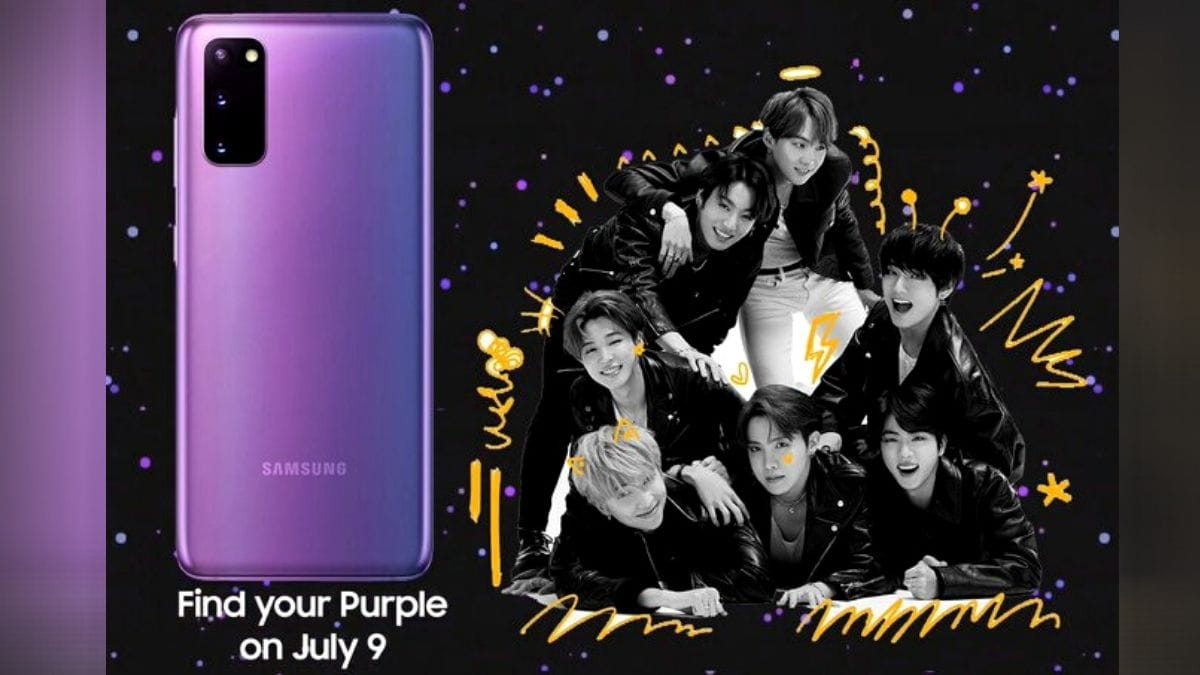 Samsung is reportedly gearing up to launch the limited edition of Galaxy S20+ in collaboration with Korean pop band BTS and the phone will be called Galaxy S20+ BTS Edition. The phone will likely be offered in Purple colour option and the pre-orders will commence on June 19. The South Korean tech giant has also reportedly partnered with French retail chain Fnac for the global launch of the Galaxy S20+ BTS Edition. The Samsung Galaxy S20+ was unveiled in February and almost a month after its launch, the phone was being promoted by BTS member Kim Tae-Hyung popularly known as ‘V’.

Samsung via its Twitter account hinted at the launch of the BTS edition of a Galaxy smartphone on July 9. The box of the smartphone in the teaser is decorated with seven hearts, denoting the seven members of the South Korean pop band, and also carries the BTS band logo. The South Korean tech giant lastly added that the pre-booking of upcoming Galaxy phone BTS Edition will commence on June 19, adding that it will continue till July 5.

The Twitter post by Samsung also states that the availability of the smartphone may “vary by country.” It is unclear whether the BTS edition of the Samsung phone will come to India where the band has a big fan base. Similarly, notable tipster Max Weinbach has claimed that Samsung will launch the BTS edition of Galaxy Buds+ as well. The South Korean tech giant is yet to confirm this development.

To recall, Samsung launched the Samsung Galaxy S20+ in February. The phone features a 6.7-inch Infinity-O Dynamic AMOLED 2X display and it is powered by Samsung Exynos 990, coupled with 8GB RAM. Additionally, the phone has triple rear cameras and a single 10-megapixel front camera for selfies and video calling. The Galaxy S20+ packs a 4,500mAh battery and runs Android 10 with One UI 2.1 on top. The phone is currently priced at ₹ 77,999 in India.

Which is the bestselling Vivo smartphone in India? Why has Vivo not been making premium phones? We interviewed Vivo’s director of brand strategy Nipun Marya to find out, and to talk about the company’s strategy in India going forward. We discussed this on Orbital, our weekly technology podcast, which you can subscribe to via Apple Podcasts or RSS, download the episode, or just hit the play button below.