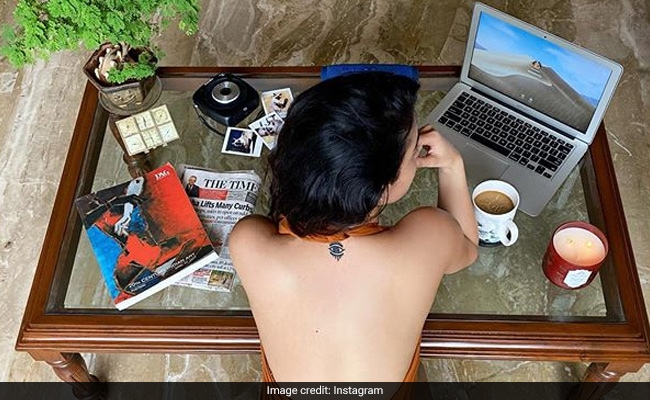 Just another day of working from home (courtesy Instagram)

Actress Amyra Dastur, who has been sharing glimpses of her life in lockdown, Instagrammed a photo of her work from home station on Thursday. However, just by looking at the post, it’s hard to identify the celeb in the photo as Amyra because that’s how she wanted her work from home post to be. In the photo, Amyra, dressed in a backless body suit and denims, has her back to the camera. Amyra’s work from home essentials include a laptop, of course, and a steaming cuppa. Is she a tea or a coffee person? Amyra’s work desk also has room for a candle, a Polaroid camera, a few photographs, a newspaper, a magazine, a table clock and a bonsai… phew. So, here’s how Amyra Dastur’s work from home scene looks like.

Photoshoots with furniture as props appear to be Amyra’s favourite pass time and here’s proof. Meanwhile, we also got glimpses of the stunning interiors of her home. She recently borrowed a piece of author NR Hart’s poetry to describe her photos: “She is a renaissance women. You will never know her completely, she holds secret worlds within her. Don’t bother telling her what to do, she is going to show you herself.”

Amyra Dastur deals with Monday blues with everything blue – from her make-up to her dress – and on days when she feels like a sunflower, she throws on a yellow dress and soaks up the sun in a sun-lit corner of the house.

Amyra Dastur is best known for her role as a runaway bride in the web-series The Trip 2. She has also starred in films such as Kaalakaandi, Judgementall Hai Kya, Rajma Chawal and Made In India.