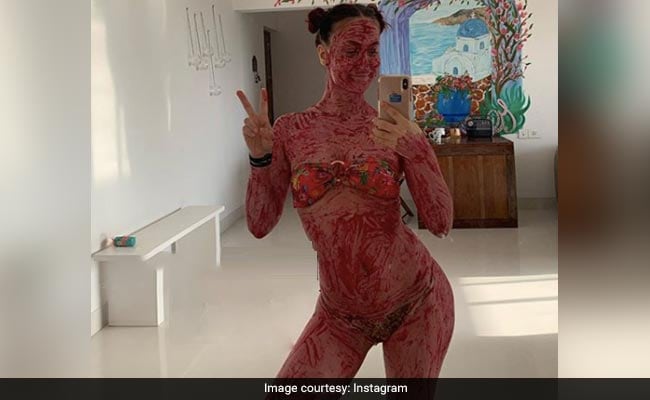 How much beetroot is too much beetroot? Guess we’ll just find out, or not. Actress-dancer Elli Avram spent a Sunday smelling of beetroot and looking like an “alien”. Her words. The 29-year-old actress, who was advised by her house help to apply beetroot all over her body for what appears to be a DIY skin treatment, decided to go ahead and give it a try. In an Instagram post shared on Sunday, she detailed her skin treatment session with beetroot therapy with an ROFL caption. In the end, Elli Avram also described her beetroot juice smeared self as “Beetroot ki dukaan.” She shared a bunch of photos, looking adorable in a printed bikini, with her hair tied in two top knot buns. In one of the photos, she can be seen flashing the victory sign. Now, read her caption first.

“For the love of beetroot. Usha’s (my girl at home) idea. Ma’am, pura body mein lagate hai! So we started with the face and later on said ‘What the heck? Let’s put it all over!’ Later on she called me an alien. Like that she’s ‘aware’.” While sharing the photos on Instagram, Elli Avram added “space” as her location. LOL. Take a look at this. Dare to try?

Elli Avram, best known for her skills on the dance floor, has featured in songs such as Kudiyan Shehar Diyan, Billionaire, Chamma Chamma and Zila Hilela. She participated in the seventh season of Salman Khan-hosted reality TV show Bigg Boss. She’s also been a contestant on Jhalak Dikhhla Jaa 7. Last year, she featured in web shows like Typewriter and Inside Edge 2.

Summer Diet: How To Make Maharashtrian-Style Raw Mango And Onion Pickle For A Sweet-N-Sour Side Dish

Kajol Sums Up Her Current Mood With This Throwback Pic. “Relatable,” Says The Internet