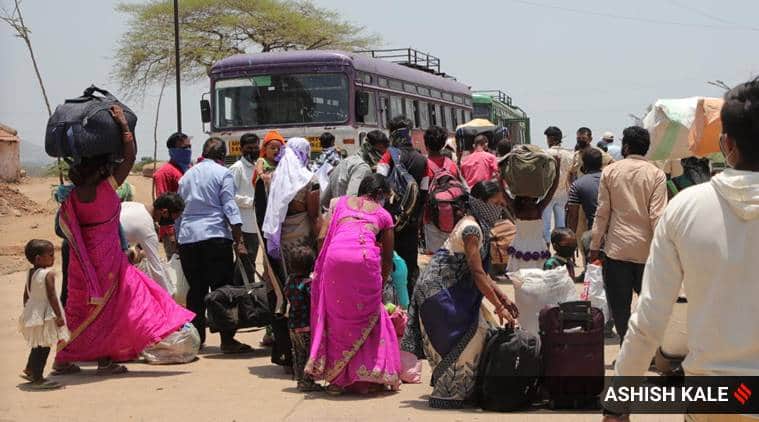 
Migrant workers wait to board a special bus amid the nationwide lockdown in Maharashtra (Express Photo: Ashish Kale)

Taking to Twitter, Deshmukh accused the Centre of “playing with human lives to score political brownie points.” His remark comes a day after Railway minister Piyush Goyal lashed out at the state government for providing a list of only 46 trains on Monday despite the ministry making preparations for 125 trains.

Deshmukh also rebuffed claims by former chief minister Devendra Fadnavis that the Centre spent Rs 300 crore on migrant labourers traveling home. Terming it “wholly false and misleading”, the minister said the ticket cost of all migrants has been borne from the CM relief fund.

Maharashtra with the most number of coronavirus cases and deaths in the country, has been engaged in a bitter feud with the Centre over the Shramik special trains to transport stranded migrant labourers to their native places amid the lockdown.

In a televised speech, Chief minister Uddhav Thackeray on Sunday claimed that while his government has been seeking 80 trains daily to send migrants back to their respective states, the Centre is sending only 30 to 40 trains daily. He added that his government has so far sent back 7 lakh migrants to their respective states in 481 trains, with the state bearing 100 per cent of the costs — spending Rs 85 crore.

Shiv Sena MP Sanjay Raut  said the Union government must not view Maharashtra as “a state ruled by the opposition” but as “a state only”.

Meanwhile, the Central Railways also came out with a press release stating that it had to cancel 65 trains due to lack of preparations on part of the Mahahrashtra government.

Punjab: ‘Soldier’ at farmers’ protest has agencies scurrying to ascertain his ‘true’ identity