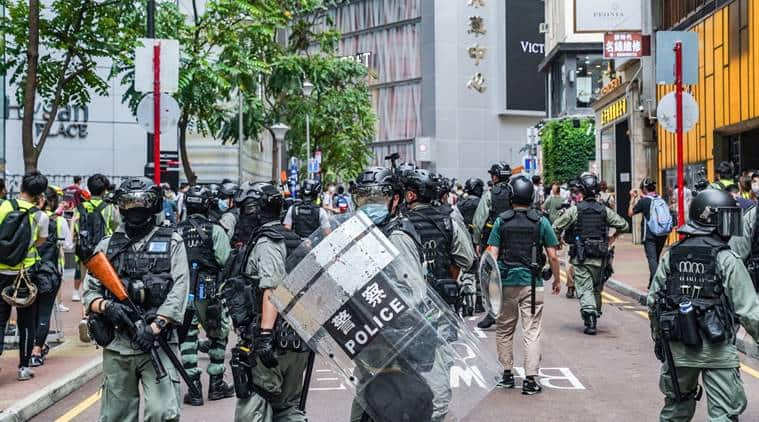 China has lodged diplomatic protests with the US, the UK, Canada and Australia for “interfering” in its internal matters by criticising its new security law for Hong Kong and also warned America of countermeasures if it did not stop the “frivolous” political manipulation over the issue.

“China’s decision to impose the new national security law on Hong Kong lies in direct conflict with its international obligations under the principles of the legally binding, UN-registered Sino-British Joint Declaration,” the joint statement released by the four countries said. The proposed Chinese law would undermine the “one country, two systems” framework, the four allies said in the statement, referring to the arrangement under which Hong Kong, a former British colony, was handed back to China in 1997.

Reacting to the four countries’ statement, China’s Foreign Ministry spokesman, Zhao Lijian told a media briefing on Friday that China has lodged diplomatic protests with the four countries. “Hong Kong is part of China and the central government has the right to establish a national-level legal system to implement ‘one country, two systems”, Zhao said. It is China’s internal affair and no foreign country has the fright to interfere, he said.

Separately, the Trump administration informed the US Congress that Hong Kong was deemed no longer suitably autonomous from China.
The assessment by the US State Department is a crucial step in deciding whether the city will continue to receive preferential economic and trade treatment from the US as spelt out by the 1992 US-Hong Kong Policy Act.

About US President Donald Trump’s plans to impose sanctions on Hong Kong, Zhao reminded Washington about its extensive trade and commercial interest in the city and said China would retaliate with countermeasures. Hong Kong after returning to China fully leveraged its position as an international business hub. “It is a financial trade and shipping hub. It is an important area for US investments,” Zhao said.

The US has 85,000 nationals in Hong Kong and has over 1,300 companies in the city. American firms have over 300 regional headquarters and 400 regional offices in Hong Kong, he said. In the past decade, the US trade surplus to Hong Kong reached USD 297 billion, he said.
“Safe, sound and stable Hong Kong serves the interest of the US. We welcome US business communities to continue making more progress and success in Hong Kong.

“The US should see clearly and stop interfering in Hong Kong. If the US insists on intervening, China will take all necessary countermeasures,” Zhao said. He denounced efforts by the US to take Hong Kong’s case to the UN Security Council, saying that UNSC bears the responsibility to implement global peace and stability.

“This legislation of Hong Kong doesn’t fall in the UN mandate. Besides, non-interference in the internal affairs of the countries is an important principle of the UN Charter,” Zhao said. “The UNSC is not at the disposal of the US. China and all countries upholding justice will not allow the US to make it hostage for its political purposes. We urge the US to stop such frivolous political manipulation,” he said.

“After its return, the Chinese government’s legal basis to administer HKSAR (Hong Kong Special Administrative Region) is our Constitution and the basic law of SAR, not the Sino-British Joint Declaration”, he said.

2,198 Flights Ferried Over 1.65 Lakh People Since Resumption Of Services

US moves to restrict stay of Chinese journalists to 90 days

Great Barrier Reef should be listed as ‘in danger’, UN committee recommends

Japan to widen state of emergency beyond Tokyo as coronavirus surges: Media