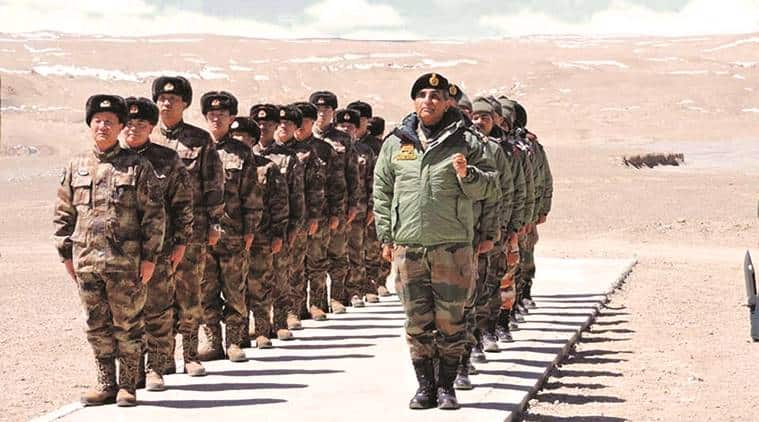 
A file photo of Indian and Chinese personnel on the LAC. (ANI)

China said on Wednesday that Indian and Chinese troops have started implementing the “positive consensus” reached by the senior military officials of the two countries on June 6 aimed at “easing” the situation along the borders.

The Chinese foreign ministry spokesperson’s remarks came a day after officials in New Delhi suggested that armies of India and China have undertaken a “limited disengagement” in few areas in eastern Ladakh in a demonstration of their intent to end the border standoff peacefully ahead of another round of military talks on Wednesday.

Asked about the reports of the troops on both sides disengaging and moving back to their previous positions, Chinese foreign ministry spokesperson Hua Chunying told a media briefing in Beijing that both sides are taking steps to ease the situation along the borders. “Recently the diplomatic and military channels of China and India held effective communication on the situation along the border and reached positive consensus,” she said.

“The two sides are following this consensus to take actions to ease the situation along the borders, the spokesperson said. However, the spokesperson did not specifically give details about the disengagement or withdrawal of border troops of the two countries.

Meanwhile, in New Delhi, people familiar with the Major General-level talks held on Wednesday said that during the meeting, the Indian delegation pressed for the restoration of the status quo ante and immediate withdrawal of a sizeable number of Chinese troops from all the standoff points. The dialogue that lasted for over four-and-a-half hours took place in a “positive atmosphere” with an aim to further ease tension between the two sides, they said. The talks came a day after the two armies began a limited disengagement in a few areas in Galwan Valley and Hot Spring in a demonstration of their intent to end the row peacefully.

However, both sides remained engaged in aggressive posturing in areas such as Pangong Tso, Daulat Beg Oldie and Demchok. Military sources on Tuesday said the two armies began “disengagement” around patrolling points 14 and 15 in Galwan Valley and another in the Hot Spring area, adding the Chinese side has even moved back up to 1.5 km in the two areas. Indian and Chinese troops have been engaged since May 5 following a violent clash in Pangong Tso. In their first serious efforts to end the row, Lt General Harinder Singh, the general officer commanding of Leh-based 14 Corps, and Commander of the Tibet Military District Maj Gen Liu Lin held an extensive meeting on June 6.

Last Saturday’s talks came a day after the two countries held diplomatic parleys during which both sides agreed to handle their “differences” through peaceful discussions while respecting each other’s sensitivities and concerns. India’s external affairs ministry on Sunday said the Lieutenant General-level talks took place in a “cordial and positive atmosphere” and that both sides agreed that an “early resolution” of the issue would contribute to the further development of the relationship between the two countries. The trigger for the face-off was China’s stiff opposition to India laying a key road in the Finger area around the Pangong Tso Lake besides construction of another road connecting the Darbuk-Shayok-Daulat Beg Oldie road in Galwan Valley. The road in the Finger area in Pangong Tso is considered crucial for India to carry out patrol. India has already decided not to stall any border infrastructure projects in eastern Ladakh in view of the Chinese protests.

The situation in the area deteriorated after around 250 Chinese and Indian soldiers were engaged in a violent face-off on May 5 and 6. The incident in Pangong Tso was followed by a similar incident in north Sikkim on May 9. The India-China border dispute covers the 3,488-km-long Line of Actual Control (LAC). China claims Arunachal Pradesh as part of southern Tibet while India contests it.

Both sides have been asserting that pending the final resolution of the boundary issue, it is necessary to maintain peace and tranquillity in the border areas. In their historic informal summit in Chinese city of Wuhan in 2018, Prime Minister Narendra Modi and Chinese President Xi Jinping underscored the importance of maintaining peace and tranquillity in all areas of the India-China border region in the interest of the development of bilateral relations. The summit had taken place months after a 73-day military face-off between the two armies in Doklam that raised fears of a war between the two Asian giants. In their talks on June 6, both sides agreed to follow the broad decisions taken by Modi and Xi in the Wuhan summit to ensure peace and tranquillity along the LAC.

Pandemic is changing your next doc appointment

Singapore to reimpose strict measures if resurgence of covid-19 cases during reopening: Minister