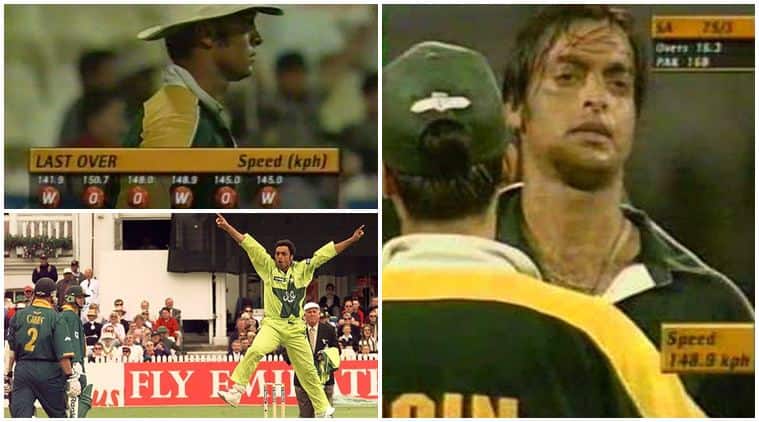 Former Pakistan speedster Shoaib Akhtar and ex-South Africa opener Herschelle Gibbs were a part of an exciting clash in the first round match of the Coca-Cola Cup in 2000.

In taxing conditions in Sharjah, Pakistan had set a modest target of 169 runs after their skipper Waqar Younis won the toss and decided to bat first.

In response, the Proteas were cruising at one stage with the scoreboard reading 74/1 after 16 overs. Only 95 more runs were needed from 204 balls with 8 wickets in hand (9, if Kirsten batted). Gibbs who was batting quite fluently had an able companion in Mark Boucher.

However, an inspired spell of fast-bowling from Akhtar — who claimed 3/9 in 4.5 overs changed the course of the game. Boucher fell to a bouncer while following batsmen, Dale Benkenstein and Lance Klusener (Man of the Series in the 1999 World Cup) were bowled out.

In that one over, Akhtar had broken the backbone of South Africa’s batting, but could not get the better of Herschelle Gibbs.

South Africa were bowled out for 101, and Pakistan became the only team to win an ODI without dismissing any of the opposition’s opening batsmen.

Gibbs remained not out on 59 while Kirsten retired hurt with back spasms on eight.

Rekindling the memories, Akhtar and Gibbs spoke about how they sledged each other.

“One @shoaib100mph spell did the damage!” wrote Gibbs on his Twitter account. Akhtar replied to the South African’s tweet and said, “Do you remember how hot it was @hershybru? It wasn’t even a spell, it was one over. Lol. In such weather conditions, i was always in a hurry.”

Do you remember how hot it was @hershybru?
It wasn’t even a spell, it was one over. Lol
In such weather conditions, i was always in a hurry 😂😂 https://t.co/zVB14wAVAq

Gibbs continued the conversation and replied to Akhtar, “you brought the heat brotherman! All you chirped was “cmon gibbsy hit me in front of square “ but I ran out of partners which didn’t help.”

The 44-year-old former Pakistan pacer wished for Gibbs’ well-being in the times of pandemic following his reply. “Good times man! I hope is all is well in these crazy times we are living in now,” he wrote.

Good times man!
I hope is all is well in these crazy times we are living in now. https://t.co/lZrHjEKU28

Beating Coronavirus Would Be “Real” Victory by PSG’s Pablo Sarabia