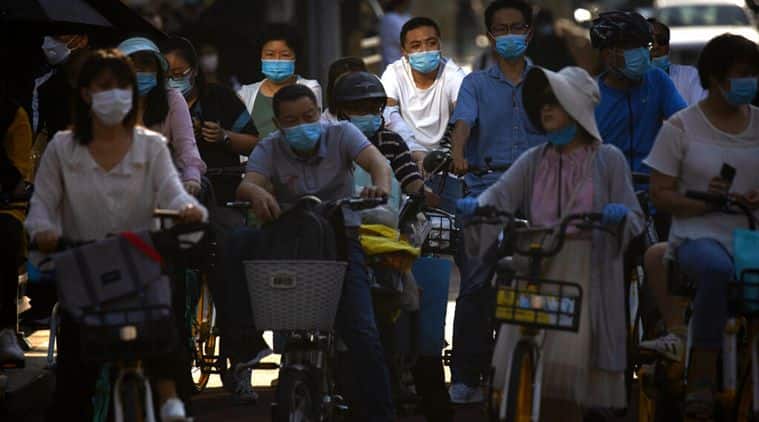 
The first death was reported on 10 January in Wuhan, China. (AP Photo/Mark Schiefelbein)

The number of coronavirus cases crossed the 14 million mark Saturday, just four days after it breached the 13 million milestone. This is the first time cases have increased by one million in less than 100 hours, news agency Reuters reported.

The World Health Organization (WHO) reported a record rise of 237,743 infections Friday, led by the United States, Brazil, India and South Africa. Nearly 6 lakh people have succumbed to the virus.

The daily increase in coronavirus cases in the US rose by 70,674 Friday after climbing by a record 77,499 a day before. The toll in the country also rose by over 900 for the fourth consecutive day. According to a Reuters analysis of cases in the past two weeks, infections are rising in 41 of the 50 states while deaths are rising in 19 states.

The surge in cases amid a debate in the US on whether masks should be worn, and schools should be reopened.

Australian PM wants to delay parliament due to Covid-19

“The government cannot ignore the risk to parliamentarians, their staff, the staff within the parliament and the broader community,” Morrison said.

On Friday, Victoria state reported a record 428 new infections, while New South Wales said it was banning dancing, singing and mingling at weddings as authorities struggle to contain a new surge in infections.

The test trails are developed by developed by the UK Rapid Test Consortium and Oxford University.(AP Photo/Silvia Izquierdo)

The finger prick antibody tests, which take about 20 minutes to detect the coronavirus infection, were found to be 98.6 per cent accurate in secret human trials held in the UK in June, Reuters reported citing the Daily Telegraph newspaper.

The government is planning to distribute millions of free coronavirus antibody tests as it passes its first major trials of the tests developed by the UK Rapid Test Consortium and Oxford University.

The 27 European Union heads who met for the first face-to-face talks since lockdowns were imposed, failed to agree on a stimulus package to support the economic fallout of the coronavirus pandemic in the bloc’s countries.

Emphasising the crucial importance of the stimulus package for the EU’s economic recovery, officials said leaders remained unable to agree on the overall size of the package and the split between grants and repayable loans, among other issues.

After announcing a gradual easing of its lockdown that lasted four months, the Argentinean government Friday confirmed its highest daily spike in coronavirus infections at 4,518. The country now has 119,301 confirmed cases, with 2,178 deaths, according to official data.

On lifting the country’s lockdown, President Alberto Fernandez said the gradual return to normalcy would happen in several stages, with the first stage lasting till August 2.

After registering 736 deaths on Friday, Mexico’s death toll crossed the 35,000 mark, the fourth highest in the world. The country has over 3,24,000 cases.

The government has raised concerns over the crowding in hospitals, especially in the state of Nuevo Leon. Even the Gulf coast state of Tabasco has an 85 per cent hospital occupancy at the moment.

President Andrés Manuel López Obrador said he was concerned about the situation in Tabasco, where he was born.

Mainland China reported 22 fresh Covid infections on Saturday, up from 10 a day earlier. Of the new infections, Xinjiang reported 16 cases while the other six were imported.

Commuters wearing face masks to protect against the spread of the new coronavirus walk through a subway station in Beijing, Thursday, July 9, 2020. (AP Photo/Mark Schiefelbein)

As of Friday, mainland China had 83,644 confirmed coronavirus cases, the health authority said. The Covid-19 toll stood at 4,634.

A recent spike in coronavirus cases in Canada is worrying and can be linked to groups of young people gathering in bars and nightclubs, Howard Njoo, the deputy chief public health officer said on Friday.

“When we examine recent trends in case reporting, there is some cause for concern. After a period of steady decline, daily case counts have started to rise,” he added.

(With inputs from agencies)

How West Virginia became a US leader in vaccine rollout

The French battle for freedom of speech: ‘It’s all about the principle’