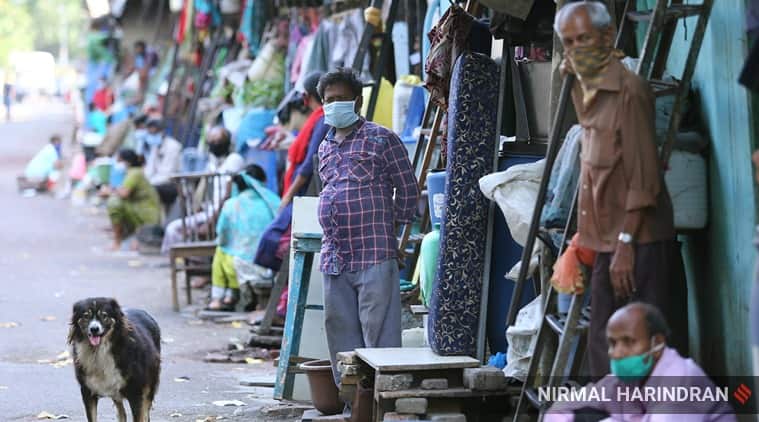 
Maharashtra continues to remain the worst hit state with over 44,500 cases and accounts for about a third of all cases in India. (Express Photo by Nirmal Harindran)

Coronavirus India updates: The Covid-19 cases in India saw the biggest spike for the second consecutive day Saturday with 6,654 new infections in the last 24 hours, taking the tally to over 1.25 lakh, while the death toll rose to 3,720 after 137 more casualties, the Union Health Ministry said.

The active cases of the coronavirus disease rose to 69,597, while 51,783 people have recovered and a patient has migrated, according to the ministry bulletin. “Thus, around 41.39 percent patients have recovered so far,” a Health Ministry official said. The total of 1,25,101 confirmed cases of the novel coronavirus pandemic includes foreigners.

Maharashtra remained the worst-hit state with over 44,500 cases, accounting for about a third of all cases in the country and two out of every five deaths. For several days now, Bihar has been showing signs of a big surge in its coronavirus cases. With over 2,000 cases now, more than half of which has been discovered in just last one week, Bihar is fast developing into the next trouble state. Punjab, incidentally, has slowed down significantly in the last one week. The country has been recording a daily rise of over 5,000 cases everyday since Sunday and saw a daily spike of over 6,000 cases in the past two days.

Will try to resume some international flights before August, says Puri

Aviation Minister Hardeep Singh Puri today said the ministry “will try to start good percentage of international passenger flights before August”, adding that there’s no contradiction between domestic flights beginning from May 25 and lockdown in India being imposed till May 31.

When asked about the issue of evacuation of Indians stranded abroad, he said: “We will be able to bring around 50,000 citizens back through special flights during the first 25 days of Vande Bharat Mission. We are also planning to bring back Indian citizens from Sri Lanka either by ship or flights. Discussions are at an advanced stage.”

The government claimed Friday that the nationwide lockdown had averted 14-29 lakh cases and 37,000-71,000 deaths, based on modelling projections by various independent agencies and individuals. Dr V K Paul, Member (Health), NITI Aayog, said the lockdown decision “by the Prime Minister was early and timely”, and “the way the country effectively implemented it, is an international example”. The lockdown has “made it difficult for the virus to travel”, Dr Paul said. However, he stressed the need to stay cautious, as a measure like the lockdown could not “go on forever”.

The doubling time of the epidemic is now 13.3 days against the 3.5 days before the lockdown, and the outbreak has been limited, he said.

The Kerala government Friday said the passengers would have to stay in home or institutional quarantine for 14 days. (Express photo by Partha Paul)

With domestic flight operations set to resume on Monday, at least five states including Kerala, Andhra Pradesh, Telangana, Karnataka, Assam and the UT of Jammu and Kashmir have decided that incoming passengers would have to stay in home or institutional quarantine.

The Kerala government Friday said the passengers would have to stay at home or institutional quarantine for 14 days.

The governments of Andhra Pradesh and Telangana have decided to quarantine people arriving on flights as well as other modes of transport.

Assam Health Minister Himanta Biswa Sarma has said that people arriving by any mode would have to stay in quarantine for 14 days.

Congress leader Rahul Gandhi Saturday shared a video of his recent interaction with migrant workers in Delhi’s Sukhdev Vihar. The group – of about 20 persons – was walking hundreds of kilometres from their work-site in Haryana to their village near Jhansi in Uttar Pradesh.

In the video, Gandhi says, “Coronavirus has brought pain to a large number of people, but it has seriously affected our migrant brothers and sisters. They walked thousands of kilometres and without food. They were stopped, threatened, but they kept walking towards their home. I will show you what they are thinking, what they expect and how scared they are.”

The central government is considering a calamity cess on Goods and Services Tax (GST) to tide over the economic crisis triggered by the coronavirus pandemic, The Indian Express has learnt. Sources said that a proposal to raise additional revenue from GST, excluding goods and services in the five per cent slab, is with the Finance Ministry.

Kerala is the only state to have levied such a cess using the Constitutional provision, Section (4) (F) of Article 279 A, which refers to “any special rate or rates for a specified period to raise additional resources during any natural calamity or disaster”

600 affected in Assam floods; new guidelines for relief camps on account of pandemic

Over 600 in Assam have been affected in the first floods of the season following continuous rainfall and the release of dam water. According to a bulletin issued by the Assam State Disaster Management Authority (ASDMA) on Friday evening, 630 people in two villages of the Kalgachia revenue circle in Barpeta district were affected.

In view of the Covid-19 outbreak, the ASDMA has also issued fresh guidelines for the management of relief camps during the flood season. Earlier while people from entire villages would be mass evacuated and put in schools, preparations are being made to identify the capacity of different relief camps. Inside the relief camps too, there are a number of new directives to be followed. As per the new guidelines, instead of the earlier 3.5 square metres earmarked per person in the camp, the space will double to 7 square metres.

The first Shramik Special train from Chennai with 1,477 stranded people reached the Dimapur railway station in Nagaland on Saturday. The migrants walked through two disinfectant tunnels at the station.

“The passengers were taken to the Agri Expo Site at 4th Mile by buses arranged by the state government for medical screening,” an official told PTI.

The people were reportedly from three districts — Dimapur, Mon and Peren — and have been quarantined at various centres while others were sent to quarantine facilities in Kohima.

2.02 lakh migrants were brought back from Gujarat, 1.12 lakh from Maharashtra and 1.10 lakh from Rajasthan. (Express Photo By Ganesh Shirsekar)

As of Friday, over 5 lakh Madhya Pradesh migrant workers stranded in different parts of the country due to coronavirus lockdown, have been brought back to their home state, mostly by buses, a government official said on Saturday.

At least 3.52 lakh migrants have returned to MP by buses while 1.46 lakh others returned on 119 special trains, said Additional Chief Secretary ICP Keshari.

Tamil Nadu’s austerity measures to save up to Rs 1,000 crore

As the economic crisis triggered by the lockdown has had far-reaching implications on the state economy, the Tamil Nadu government has been forced to take drastic steps, including banning the creation of new government posts, purchase of vehicles, foreign travel of officials and presentation of gift articles. Even official seminars, conferences and dinners have been banned.

While the government expects to save Rs 1,000 crore from these austerity measures, the state had suspended encashment of earned leave for one year period and also frozen the Dearness Allowance (DA) of state employees till July 2021 last month. This move was to save up to Rs 7,300 crore. There are 12 lakh employees and 7.4 lakh service pensioners.

Gujarat: 15 sleeping migrant labourers killed after truck runs over them in Surat