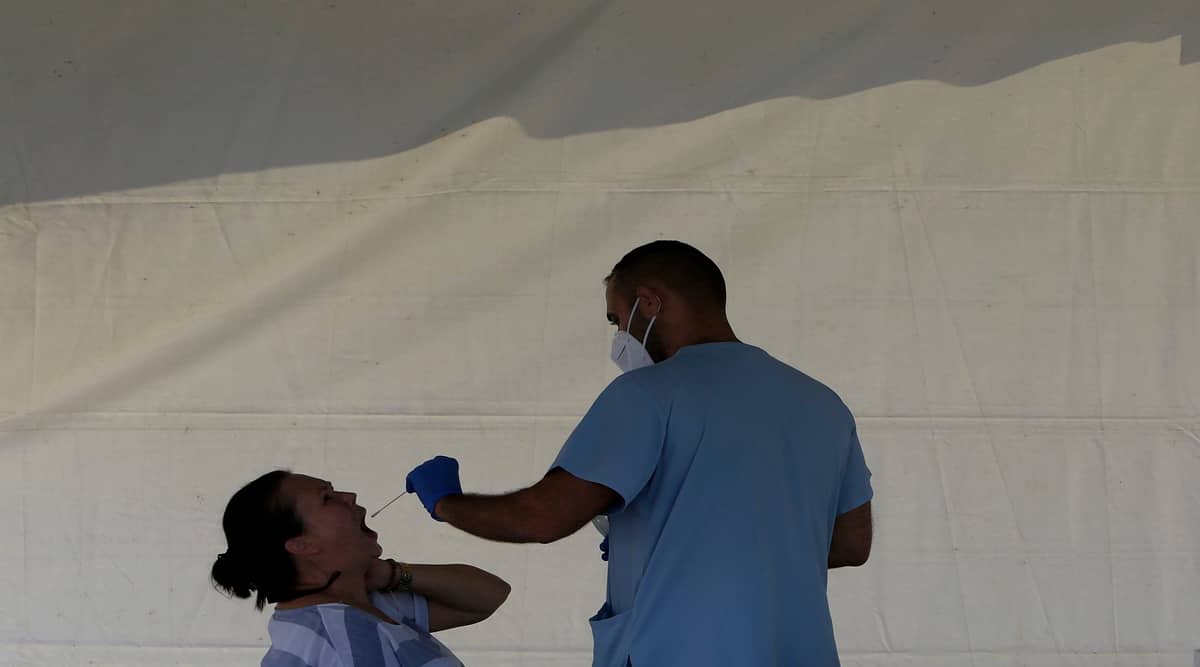 A health worker carries out a COVID-19 test of a resident of Larnaca, a resort town in southern coast of Cyprus, on Monday, Sept. 28, 2020. The current situation is reminiscent of the period that lasted from 1974 to 2003, when Cypriots were not allowed to travel to the other side of their divided island. (AP Photo/Petros Karadjias)

After 17 years of relatively free movement between the two parts of the island of Cyprus, the measures introduced to control the coronavirus pandemic have made face-to-face contact between Greek Cypriots and Turkish Cypriots impossible once again.

The current situation is reminiscent of the period that lasted from 1974 to 2003, when Cypriots were not allowed to travel to the other side of their divided island. When Turkey invaded the island in 1974, Greek Cypriots fled to the south, while Turkish Cypriots moved to the north. The Greek part, the Republic of Cyprus, is a member of the EU, whereas the Turkish Republic of Northern Cyprus is only recognized by Turkey.

In 2003, the Turkish Cypriot leader, Rauf Denktash, lifted some restrictions on movement. For the people of Cyprus, the move marked the start of a long process of rapprochement, which followed the ups and downs of the negotiations about reunification of the island. For most Cypriots, it was the first time they had ever met a member of the other community.

Holes in the ‘wall’

Just two months after the opening of the first crossing points in 2003, Serkan, a 32-year-old Turkish Cypriot, met Andri, a 31-year-old Greek Cypriot. Up until then, Turkish Cypriots had not really existed for Andri. As she says herself, “their presence was hidden in my mind.”

At first, Serkan visited the south. But just like Cinderella – as Andri puts it – he had to return to the north before midnight because at the time, the crossing points were closed between midnight and 6 am.

For her part, Andri did not want to cross over to the north. “I couldn’t stand to see the Turkish flags,” she says. Eventually, however, Andri crossed the “Green Line” to see the places where her boyfriend – now her husband – liked to hang out. “I thought it wasn’t fair on him; I had to enter his space the way he entered mine,” she says, adding “it took me three years to cross and not feel stressed.”

Burak and Chrisie met in 2014 at a university program for leadership. “I didn’t know the program was bi-communal,” says Chrisie. “If I did, I wouldn’t have attended, since I had a different idea in my mind back then.” For her, “the Turkish Cypriot community was something blurry.”

“I had the impression that Turkish Cypriots were different, that it is not safe to go there to meet people because we didn’t know their culture. That is why I kept my distance.”

Burak, who held nationalist views as a schoolboy, says, “That changed when I started to cross into the south. I realized that Greek Cypriots are like us – the habits are the same, the behavior is the same – and then I took the decision to start working for peace.”

The impact of COVID-19

After more than 17 years of relatively free passage, things changed when in March of this year, the authorities in the south and later in the northern part introduced measures that restricted the movement of people from the south to the north and vice versa.

The situation makes Burak, who is now married to Chrisie and lives with her in the Greek part, anxious. “I am afraid that COVID-19 was an excuse to close the checkpoints and stop the crossing of people,” Chrisie fears.

“They chose the easy way, instead of using COVID-19 as an opportunity for collaboration,” adds Burak, who is worried about what he calls this “new separation.”

“All the peace-building bi-communal activities have stopped; people cannot cross. We’ve gone back 20 years,” he says, calling it a major setback.

Andri, whose life and that of her husband is built on both sides of the Green Line, feels the same way. Her family’s life has been disrupted by the closing of the crossing points. What worries her more is the fact that people are slowly getting used to the division again.

The difficulties faced today by the couples from both parts of Cyprus are far removed from the atrocities experienced by their families 45 and 55 years ago. Different aspects of Cyprus’ division feature in the history of both couples’ families.

Even though his father was forced to leave his village in the south when it was burned down during the bi-communal violence of 1964, Burak doesn’t want to dwell on the past.

Chrisie’s mother is a refugee from Assia. In August 1974, she fled her home and spent almost three years living in a tent in the south with Chrisie’s grandmother and uncle. The rest of her family was killed in the Assia massacre.

Approximately 97 Greek Cypriot civilians – including elderly people and children – were executed in Assia. The massacre was an act of retribution for the execution of Turkish Cypriot civilians in nearby villages.

Most of Assia’s victims were considered missing persons. Just recently, Chrisie’s family was informed that bones found by the bi-communal Committee of Missing Persons might belong to two members of her family. The results of the DNA tests are pending.

Andri’s family also comes from the village of Assia and counts two missing persons from the 1974 tragedy — her 14-year-old cousin and her uncle.

Serkan’s father was also forced to leave his village in Paphos during the intercommunal violence of 1964. Despite the suffering, both Andri’s and Serkan’s families are very supportive of their relationship.

When asked about the future, neither couple is optimistic about a possible solution to the Cyprus problem and the reunification of the island. Serkan and Andri believe that neither the Greek Cypriot side nor Turkey are genuinely committed to finding a solution.

Burak and Chrisie believe that with the way the negotiations are being conducted, an outcome is not to be expected anytime soon. They say that with the situation in Cyprus as it is, if they continue to face problems, they are prepared to leave and build a life together elsewhere.

Donald Trump has a coronavirus infection: What happens next?

Two Afghans who trekked to France have lessons for evacuees