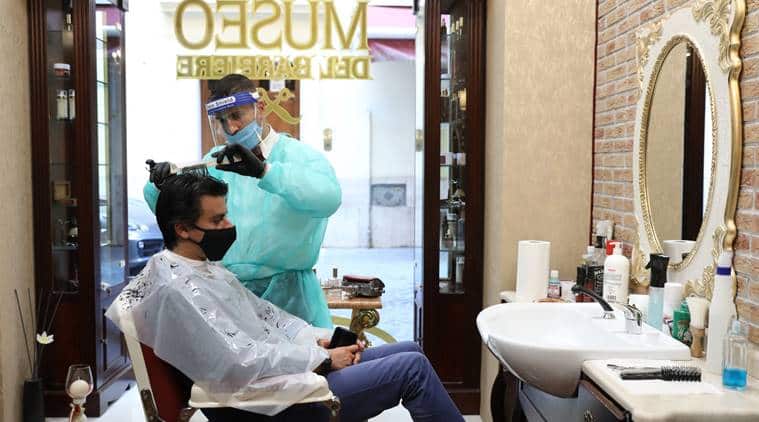 
A hairdresser, wearing a protective face mask, works in a barber shop in Rome, Italy, on Tuesday, May 19, 2020. Italy registered the lowest number of new coronavirus cases since early March as the government eased a nationwide lockdown Monday allowing shops, bars and restaurants to reopen as long as they respect health and safety rules. (Bloomberg)

Europe’s coronavirus infections remain under control after weeks of looser restrictions on daily life, paving the way for further steps to lift economies out of deep recession.

Officials in Germany, France, Italy and Spain are closely monitoring contagion data to see if looser controls are backfiring. That appears not to be the case, even if Germany’s R value — the average number of people infected by one person — has ticked back above the key threshold of 1.0.

While new cases are an important gauge, they’re just one of the indicators. Surveys conducted at random and tracking activity at doctors’ offices may be a better guide because they could identify risk before infections are confirmed.

Here is the situation in continental Europe’s major economies, as lockdowns of varying degrees of severity are lifted:

Chancellor Angela Merkel’s cabinet last week paved the way for a global travel warning to be lifted for European countries from June 15, the latest move toward a return to normality in Europe’s largest economy.

In a first step April 20, German shopkeepers were allowed to start resuming business after the nation appeared to bring the virus under control relatively quickly. Schools were partially reactivated from May 4 and a broader easing was announced two days later, including reopening restaurants and hotels.

Social-distancing rules remain in force, while some regions where infection rates are persistently trending lower are relaxing curbs more quickly.

French data was skewed by a big drop in new infections June 2 after authorities changed their methodology. While the trend to lower infections remains intact, the adjustment underscores the risk of relying exclusively on new cases.

France started to gradually ease its lockdown from May 11, with shops and businesses allowed to reopen under strict hygiene conditions, and some students returning to school, depending on the local situation.

Parks and beaches have reopened, with social-distancing rules in force. Domestic travel restrictions were lifted last week, and restaurants and cafes were also allowed to operate, although with limits in so-called “orange areas” with relatively high infections rates such as Paris, with only terraces open.

The curbs are expected to be lifted by June 22. The Versailles palace and gardens, the country’s third-most visited tourist site after Disneyland Paris and the Louvre Museum, reopened to the public last weekend.

New infections have been steadily declining in recent weeks, with a sharp drop in the number of hospitalized patients. Virus cases in intensive care units fell to 283 Monday, compared with about 4,000 at the peak of the outbreak in early April.

After almost two months, Italy began emerging from lockdown on May 4, when about 4 million people went back to work, citizens were allowed to leave their homes for a run or a walk, and could buy takeout espressos and pizzas. Most shops, bars and restaurants were allowed to reopen from May 18 with distancing rules.

Final restrictions were lifted earlier this month, with free movement inside the country and no requirement for travelers to quarantine when arriving in Italy. Theaters and cinemas can reopen from June 15.

Spain began easing its severe lockdown rules on May 10, and the whole nation is now into the second or third stage of a four-phase plan.

As the outbreak receded, the central government said May 31 it would hand powers to manage the winding down of lockdown measures to the country’s 17 regional administrations.

The two biggest cities of Madrid and Barcelona entered the third stage on June 8. Social contact is still limited to smaller groups and restaurants and bars are only allowed to open at up to 50% of their capacity.

Hotels can resume business with a reduced use of communal spaces, and malls can also operate with limited capacity. In other parts of the country, beaches have reopened, along with bars and night clubs, although dancing isn’t yet permitted.

The government has said that, as of July 1, it will no longer impose a two-week quarantine for travellers from abroad. The announcement came as part of a push to revive tourism, which accounts for about 12% of the economy.

US puts J&J in charge of plant that botched Covid-19 vaccine, removes AstraZeneca