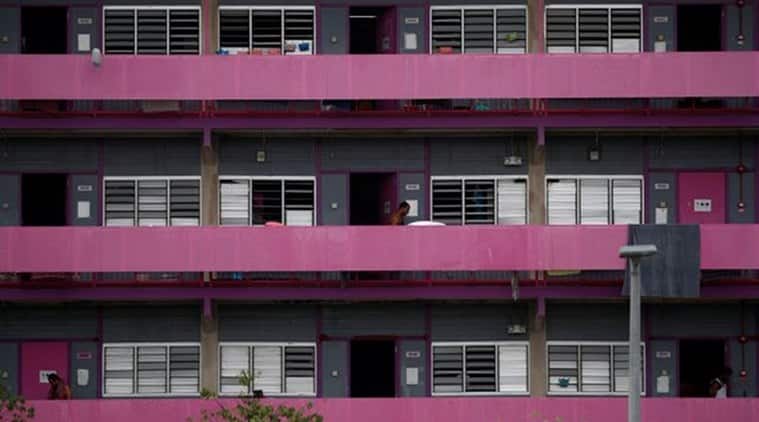 
Migrant workers walk outside their rooms in a dormitory, amid the coronavirus disease outbreak in Singapore. (REUTERS)

Singapore is heading towards its worst-ever recession in nearly two decades as the country faces severe economic downturn due to the COVID-19 pandemic, which has infected 32,343 people, officials said on Tuesday. The gross domestic product (GDP) of Singapore is expected to shrink between 4 and 7 per cent this year, down from the previous projected range of a contraction between 1 and 4 per cent, the Ministry of Trade and Industry (MTI) said.

The last time Singapore posted a full-year contraction was during the dotcom bust in 2001 when growth fell by 1.1 per cent. Its worst recession thus far happened during the Asian financial crisis in 1998. The economy shrank by 2.2 per cent then, according to a Channel News Asia report.

The trade and industry ministry said sectors like construction and marine and offshore engineering have been severely affected by manpower shortages due to the outbreak of infections among foreign workers, especially those living in dormitories.

Singapore on Tuesday reported 383 new coronavirus cases, of which all are foreign workers living in dormitories. Only one patient is a Singaporean national or permanent resident (foreigner).  The total number of coronavirus cases in Singapore now stands at 32,343, the health ministry said.

Tuesday’s cut in GDP growth forecasts deeper into negative territory marks the third revision by the country’s policymakers in slightly more than three months and follows a warning by the central bank last month of a worse-than-expected slump, the Channel News Asia report noted.

The trade and industry ministry said its latest downgrade is made in view of a deterioration in the external demand outlook for Singapore and the expected economic impact from the country’s “circuit breaker” measures.

However, it cautioned that notwithstanding the downgrade, there continues to be a significant degree of uncertainty over the length and severity of the COVID-19 outbreak, as well as the trajectory of the economic recovery in both the global and Singapore economies.

In its assessment, the ministry said the pandemic’s disruptions to economic activity in major economies around the world, such as the US and China, have been more severe than expected.

There are also “significant” uncertainties in the global economy, it said, citing the risk of subsequent waves of infections in major economies like the US and Eurozone that further disrupt economic activity. “In particular, if infections start to rise and strict measures such as lockdowns and movement restrictions are re-imposed, the downturn in these economies could be more severe and prolonged than expected,” the ministry said.

Meanwhile, Singapore is cautiously gearing up for the end of its “circuit breaker” period next week and to reopen its economic activities from June 2 in phases.

The strict social distancing measures will be progressively lifted in three phases, with the resumption of economic activities that do not pose a high risk of transmission of the virus in the first phase.  The “circuit breaker” measures were first announced on April 7 and were further tightened after three weeks, with more workplaces closed and social gatherings banned.

The country’s ‘circuit breaker’ has further dampened domestic economic activity and domestic consumption, the trade and industry ministry said. Consumer-facing segments, such as retail and food services, are among those affected by these safe distancing rules. Firms across most sectors, especially those that cannot operate fully from home, have also been working under reduced capacity as a result of the closures and fall in demand, it said.

National Development Minister Lawrence Wong on Monday said Singapore has to “move cautiously” in exiting its COVID-19 “circuit breaker” as there are still “hidden cases” of infection circulating among the general population.

Lawrence made the remarks while citing the example of eight pre-school staff members who tested positive for the virus after a mass testing exercise.

As of Monday, Singapore had 607 patients undergoing treatment in hospitals and 15,592 people in isolation for mild symptoms. While the deadly virus has claimed 23 lives so far in the country, 15,738 patients have recovered from the disease, the health ministry said.

In war and in peace, passion for cricket alive and well in Afghanistan

China says it has captured a group of Taiwanese spies