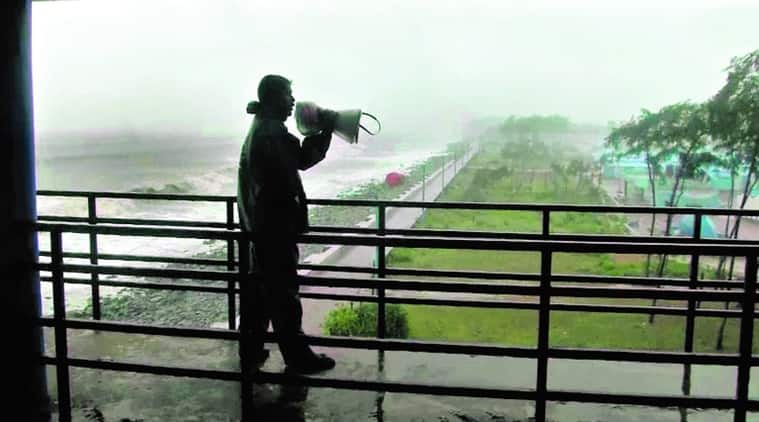 A civil defence staffer asks people to stay indoors as Digha sees high tide ahead of the landfall of Cyclone Amphan on Wednesday. ANI

The extremely severe cyclonic storm Amphan made landfall on the coast of West Bengal around 2.30 pm on Wednesday, bringing in its wake fallen trees, flattened homes, and fresh waves of difficulty and anxiety for people struggling with the fallout of the novel coronavirus outbreak and the nationwide lockdown.

West Bengal Chief Minister Mamata Banerjee, who spent all day at the cyclone control room at the state secretariat monitoring the situation, said at least 10-12 people had been killed.

“Area after area has been ruined. I have experienced a war-like situation today. At least 10-12 people have died. Nandigram, Ramnagar… the two districts of North and South 24-Parganas are destroyed,” PTI quoted her as saying.

In Kolkata, wind speeds quickly went from 69 kmph to about 105 kmph a little before 6 pm, and kept increasing in intensity thereafter.

The districts of East Midnapore, South 24-Parganas and North 24-Parganas were the worst affected. The same areas had been pounded by cyclone Bulbul in November 2019.

Heavy rain and strong winds had been pummelling the coastal towns of Digha, Tajpur, Shankarpur, Mandarmani, Bakkhali, Kakdwip and Haldia since morning. As Amphan tore into Digha, giant waves crashed on to roads lining the beach, and trees taller than buildings fell at regular intervals.

Fearful of the cyclone’s ferocity, 48-year-old Sanat Nandi, who had taken shelter with his wife and daughter at a multipurpose cyclone centre in Padima village, worried for their thatched hut as the wind howled and the rain came down hard.

A hand-rickshaw puller, Nandi said the hut was his only possession — the pandemic had exhausted the very little savings he had, and the family had been living on free ration provided by the local panchayat at New Digha in West Bengal’s East Midnapore district.

“If my hut is destroyed in the cyclone, we will be on the streets. My daughter is 15, and will be of marriageable age in a few years. We are praying the cyclone does not bring down our home,” Nandi told The Indian Express.

At least 230 people had moved to this shelter as Amphan headed to coastal West Bengal. And most had similar fears and prayers as Nandi — their houses should remain intact. It has been a double whammy for all of them — the pandemic and the cyclone.

Barun Binnari, a 24-year-old who works as a daily wager, was also at the shelter with his parents and brothers. “May this cyclone pass without causing much damage. We have a weak tin-roof house which may not survive this storm. Last year, after Cyclone Bulbul, we had to repair the house. Now, we have no money for repair work,” he said. He has been without work ever since the start of the lockdown.

NDRF personnel deployed at Digha have added responsibilities — sanitisation of the cyclone centre and ensuring social distancing during the wait for the cyclone, its immediate aftermath.

In-charge of the cyclone centre, Abhishek Kumar Gaurav, Assistant Commandant, 2nd Battalion, NDRF, said: “When it comes to natural calamity, it is not possible to say no to people looking for shelter. We can only allow about 350 people here. Some people have also taken shelter in schools. The evacuation process started on Tuesday.”

Banerjee also spoke to the district magistrates and police superintendents of various districts including East Midnapore, and North and South 24-Parganas, and issued instructions from time to time.

As the cyclone intensified, trees were uprooted and electricity poles were damaged. A large number of houses, especially mud houses in the coastal areas, collapsed. A number of embankments were breached and there were reports of flooding in the low-lying areas of South and North 24-Parganas. Electricity was cut off in the coastal areas and as a precaution.

According to Met officials, it would take five to six hours for the cyclone to pass over Bengal, and the rain was expected to continue until Friday. The extent of the damage and loss of lives could be ascertained only after the storm had passed, officials said.

Deputy Director General of Meteorology, Regional Meteorological Centre, Alipore, Sanjib Bandyopadhyay said: “The process of landfall started at 2.30 pm. It takes three to four hours for landfall to be completed. At 2.30 pm, we recorded winds of speed 130 to 170 km per hour in East Midnapore and South 24-Parganas. In Alipore (Kolkata), wind speed of 69 km per hour was recorded, which increased to 105 km per hour later. This will only increase.”

In Kolkata, trees were uprooted in over thirty areas including New Alipore, Central Avenue, S N Banerjee Road, Bidhan Sarani, Shakespeare Sarani, Ballygunge, Maidan, Hastings, Prince Anwar Shah Road, and Gariahat. At many places, traffic signals collapsed. All major roads were blocked, and there were reports of waterlogging in the city.

By 1 pm, the administration closed Howrah Bridge, Vivekananda Setu (Second Hooghly Bridge) and all flyovers in Kolkata. A two-storey house collapsed in the Entally area.

The state government had already moved over 3 lakh people to cyclone shelters in various districts. Steps were taken to ensure social distancing to the extent possible. NDRF and state disaster management teams with PPE had been stationed in the affected areas.

InterGlobe, Spicejet Soar As Domestic Flights To Resume On May 25