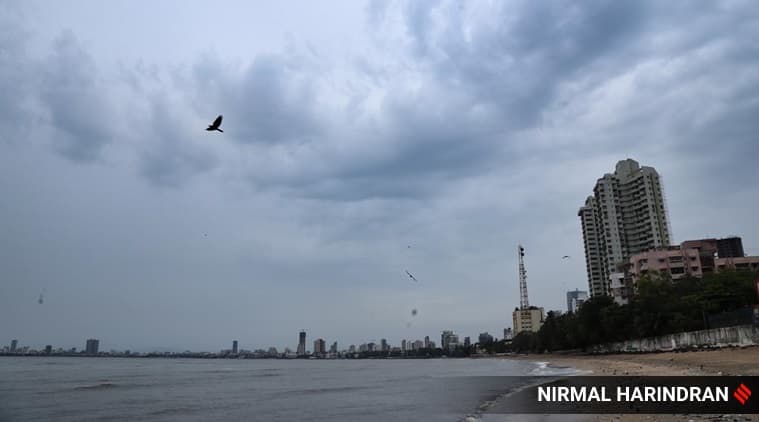 
The cyclonic storm, Nisarga, is likely to be formed within the next 24 hours.

Barely a fortnight since super cyclone Amphan, one of the strongest cyclones that the country has seen, hit West Bengal, Odisha and Bangladesh, a cyclonic storm — Nisarga — has been forming in the Arabian Sea over the past 24 hours. Indian Meteorological Department (IMD) officials Monday said the low pressure area over Southeast and adjoining East-central Arabian Sea and Lakshwadeep area has concentrated into a deep depression today and lay centred about 370 km southwest of Panjim in Goa, and 690 km south-southwest of Mumbai.

The cyclonic storm, Nisarga, is likely to be formed within the next 24 hours and has a possibility of landfall on India’s western coast on June 3.

“We are keeping a constant watch on the developing storm and will have more specific details tomorrow. We will know tomorrow where the landfall will be. But as far as we can see now, the intensity of the storm will be felt in Mumbai, Thane, Raigad, Palghar, Daman, Dadar Nagar Haveli, Valsad, Navsari, Ratnagiri and Sindhudurg areas with high windspeeds and heavy rainfall,’’ said DG, IMD, Dr M Mohapatra.

While not as strong as super cyclone Amphan, Dr Mohaptra said, the monsoon moisture would lead to very heavy rainfall, and that the low-lying areas on the Maharashtra coast, especially in Mumbai, are likely to be inundated.

The IMD DG also warned of uprooting of trees and poles and said that while Nisarga will hit both the Maharashtra as well as Gujarat coastline, the latter was likely to be less affected. Mumbai, Thane, Raigad and Palghar are likely to be most affected with windspeeds up to 105-115 kmph gusting up to 125 kmph.

Scientists have meanwhile indicated a relation between increased frequency and strength of cyclonic storms in the Indian Ocean – both in the Bay of Bengal as well as the Arabian Sea. But while cyclones have always been more frequent in the Bay of Bengal, it has been less frequent off of India’s western coast – a trend that has been gradually changing.

Lead author of the IPCC (International Panel on Climate Change) Oceans and Cryosphere report and scientist at the Indian Institute of Tropical Meteorology in Pune, Dr Roxy Mathew Koll says that while post-monsoon cyclones have been seen in the Arabian Ocean, pre-monsoon cyclones, such as Nisarga, have so far been rare.

“During the monsoon period, the winds of the upper atmosphere and those of the lower atmosphere move in opposite directions – this prevents the formation of cyclonic storms. But with the temperature of the Arabian Sea having risen over the past few decades, despite the atmospheric wind conditions not being favourable, cyclones have been forming. This is something that we are studying at the institute at the moment. Even for Nisarga, we did not think it would develop beyond a low pressure system, but it has quickly developed into a depression and then a cyclonic storm. The rapid pace at which the storms are forming, are a part of the global warming trend,’’he says.

Dr Koll points out that earlier in Amphan and now Nisarga, the “anomalously warm ocean temperatures’’ are proving to intensify storms. While temperatures in the Bay of Bengal were 30-33°C prior to Amphan, surface temperatures over the Arabian Sea recorded 30-32°C prior to the depression.

Environmental experts have pointed to increasing rainfall that drops during the storm, raising sea levels, which increases the distance inland that storm surges reach, the rapid intensification of storms (the short period in which a storm intensifies from a depression to a cyclonic storm, Amphan became a super cyclone within 18 hours) and stronger storm surges as effects of climate change.

Almost all of the tropical cyclonic storms are concentrated in East Asia, North America, and the Central American regions. The North Indian Ocean-the Bay of Bengal and the Arabian Sea, generates only 7 per cent of the world’s cyclones, however their impact is comparatively high and devastating with approximately one-third of the global population living around the Indian Ocean.

Dr Anjal Prakash, Research Director and Adjunct Associate Professor, Bharti Institute of Public Policy, Indian School of Business and lead author of IPCC’s AR6 report says,“These cyclones, as per IPCC scientists, are due to ocean heat waves and warming up of oceans. The impact of the warming of the ocean means that there would be an increase in the incidences of tropical cyclone winds and rainfall, and increases in extreme waves, combined with relative sea level rise, exacerbate extreme sea level events and coastal hazards.’’

‘You will be left alone by the time Bengal goes to polls’: Amit Shah warns Mamata amid TMC desertions

Farmers harvest wheat of those still at protest sites, take crop to mandis