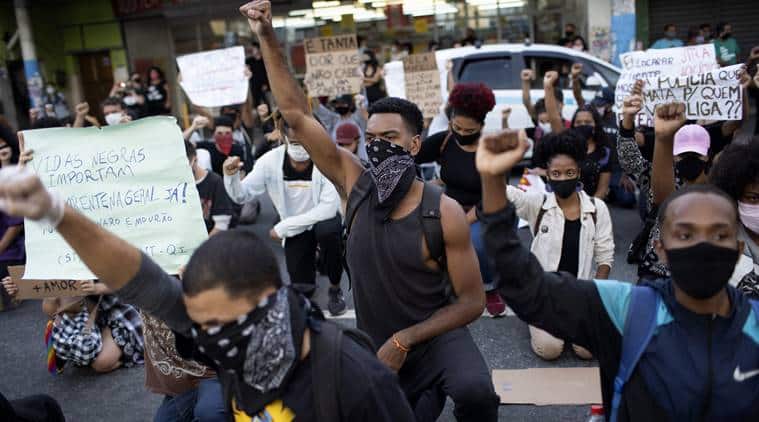 
People kneel and raise their fists in solidarity to protest against racism and hate crimes during a Black Lives Matter demonstration in Sao Goncalo, Brazil. (AP Photo)

The death of 5-year-old Miguel da Silva on Tuesday has sparked widespread protests against racism in Recife, Brazil, AFP reported. Security footage shows the boy falling to his death from the top floor of the apartment building in which his mother worked as a domestic help. The boy was left in the care of his mother’s employer, a white woman, when the incident occurred.

Da Silva accompanied his mother to work after his school was shut on account of the COVID-19 pandemic. His mother left him with her employer while she took the family dog for a walk, as per reports. Security camera footage shows the white woman pressing a button in the building’s service elevator and sending the young boy unaccompanied to the top floor. After exiting the elevator, the boy climbed up a balcony railing, lost balance and fell to his death, DW reported.

Soon after his death, hundreds of protestors carrying ‘Black Lives Matter’ signs stormed the streets of Recife, the capital of the northeastern state of Pernambuco in Brazil. Amid the ongoing global pandemic, the protestors were seen wearing face masks as they marched from the city’s court of justice till the building where Da Silva died, AFP reported.

This comes as protests against racism and police brutality sweep through the United States following the custodial killing of unarmed black man George Floyd in May. National Guard soldiers were deployed and curfews were imposed in several cities after protests escalated into riots and clashes broke out between demonstrators and the police.

Fortunate to have played cricket along side Virat Kohli, says Kane Williamson