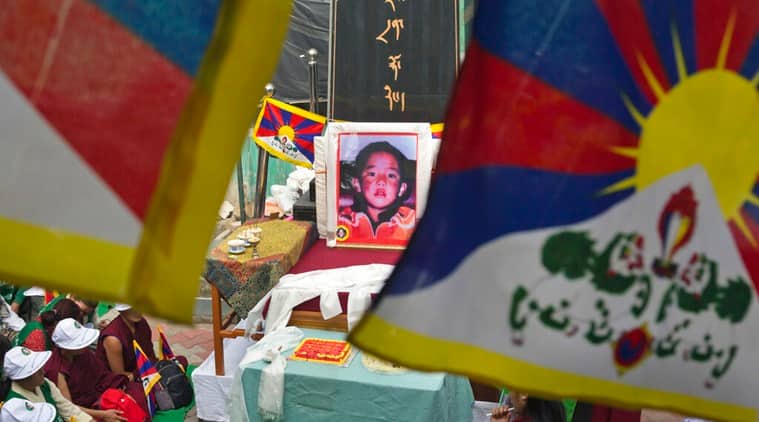 
FILE – In this April 25, 2019, file photo, a portrait of the 11th Panchen Lama, Gendhun Choekyi Nyima, an important religious leader second only to the Dalai Lama in the Tibetan Buddhist hierarchy, is seen as exile Tibetans mark his birthday in Dharmsala, India. Tibet’s self-declared government-in-exile marked the 25th anniversary of the disappearance of the boy named as Tibetan Buddhism’s second highest figure by calling on China on Sunday, May 17, 2020 to account for his whereabouts. (AP Photo/Ashwini Bhatia, File)

At the age of six, Tibetan Buddhism’s 11th Panchen Lama, was taken into captivity by Chinese authorities, becoming the world’s youngest political prisoner. He has not been seen in public ever since. But on Tuesday, China informed that Gedhun Choekyi Nyima, who disappeared 25 years ago, is now a “college graduate with a stable job”. Nyima was identified by the Dalai lama, the Tibetan spiritual leader, as the 11th Panchen Lama in 1995.

In a rare statement made during a regular media briefing, the CNN quoted China’s Foreign Ministry spokesperson Zhao Lijian as saying that “neither he nor his family wished to be disturbed in their current normal lives”. When Nyima was identified by the Dalai Lama as the 11th Panchen Lama in 1995, China rejected the nomination and promptly nominated its own candiate Gyancain Norbu, reported CNN.

Following the statement by China, the United States has urged Beijing to release the 11th Panchen Lama. Speaking to reporters during a conference call, Ambassador-at-Large for International Religious Freedom Sam Brownback was quoted by PTI as saying that “We do not have any idea of the whereabouts, and yes, we continue to press the Chinese authorities to release the Panchen Lama and to let him free, and let the world know where he is.”

In a response to a question, Brownback said “this takes on an increased interest as China continues to assert the right to appoint the next Dalai Lama, which they do not have the right to do.”

Meanwhile, the United States Commission on International Religious Freedom (USCIRF), in a statement, reiterated its call for the State Department to fill the vacancy for the Special Coordinator for Tibetan Issues.

The appointment of the Special Coordinator for Tibetan Issues is mandated by the Tibetan Policy Act of 2002, however this position has been vacant since January 20, 2017.

Previous Special Coordinators have been crucial to raising the profile of religious freedom issues in Tibet and mobilising government resources to address the issue, it said.

How Airport Security Checks In India Will Look Amid Pandemic