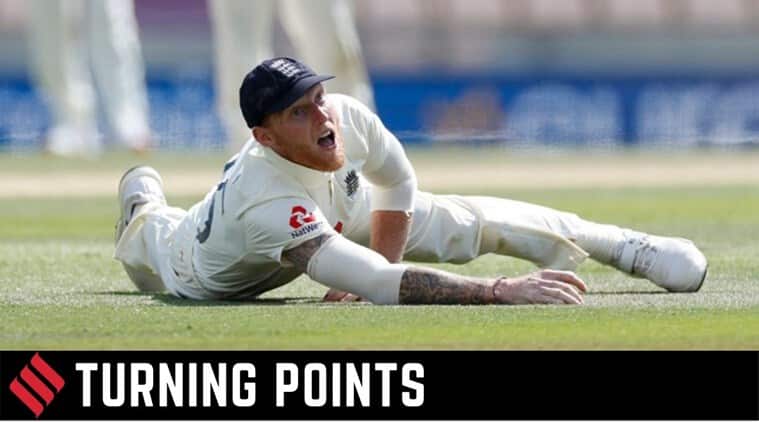 
England and West Indies were engaged in a thrilling battle at Southhampton.

West Indies won the first international cricket match since the sport went into a global shutdown for the coronavirus pandemic, beating England late on the fifth and final day of a thrilling first Test.

Jermaine Blackwood top-scored with 95 as West Indies overcame an early wobble to win by four wickets in the last session on Sunday. However, Blackwood led a charmed life to reach the nervous nineties after he was dropped on 5 and 20 and survived a relatively simple run-out chance when he was on 29. England definitely had their moments but they failed to capitalize. Was it recklessness or rustiness? Let us take a look at those moments where the game was won and lost.

England’s Ben Stokes falls on the ground in an attempt to catch the ball after a shot is played by West Indies’ Jermaine Blackwood. (AP)

Dom Bess managed to draw an edge off Blackwood, who opted to cut one on the off. However, England captain Ben Stokes had already anticipated it and started to move to the right. But as luck would have had it the ball came off the top edge and flew to Stokes’ left who managed to gets his fingertips on it before sprawling on the ground. In fact, had Stokes kept his position, it would have been a straight forward catch at waist height.

England players react after seeing a recap on the big screen.

This time the England captain had the ball in hand. Charging full steam, Stokes bowled a short one at Blackwood’s body who tried to pull it on one leg and missed it. The ball deflected off the thigh pad to the left of wicketkeeper Jos Buttler, who dived across but was unable to gather it cleanly. While umpire Richard Kettleborough signalled it as a leg bye, UltraEdge revealed a spike as the ball went past the glove. Stokes had also instantly gone up with the shout for a catch and review would have definitely got him his man.

In the middle of his fiery spell, Jofra Archer was consistently troubling Roston Chase who tried to get off strike with a risky single towards cover point. However, a miscommunication in the middle resulted in Chase and Blackwood both running towards the same end. While Chase started off immediately, Blackwood turned his back and stood his ground. Crawley, who ran towards the ball from cover, was guilty of taking his eyes off the ball and trying to collect it with his left hand – not his throwing arm. As a result, Blackwood completed the single and that one-second blemish cost England a wicket.

England should have had both the batsmen in the space of two overs. On this occasion, Blackwood went for a shot away from his body as Stokes offered a bit of width. The edge flew past gully where Rory Burns had a sharp chance but was unable to get to it. However, this would not have mattered as Stokes had overstepped and the umpire did not spot it.

Another terrible mix-up almost happened for the visitors as Jason Holder tapped one towards the front of mid-on. But once again the batsman at the opposite end (Blackwood) was not confident to set off and a moment’s hesitation was enough for England to grab a chance. However, Mark Wood’s terrible throw spoilt the chance for the Three Lions once again as Stokes hung his head in disbelief.

What All You Can Make In Air Fryer? Here Are Some Ideas That Might Surprise You

A decade on, tragedy of Christchurch earthquake still an aching pain for the White Ferns