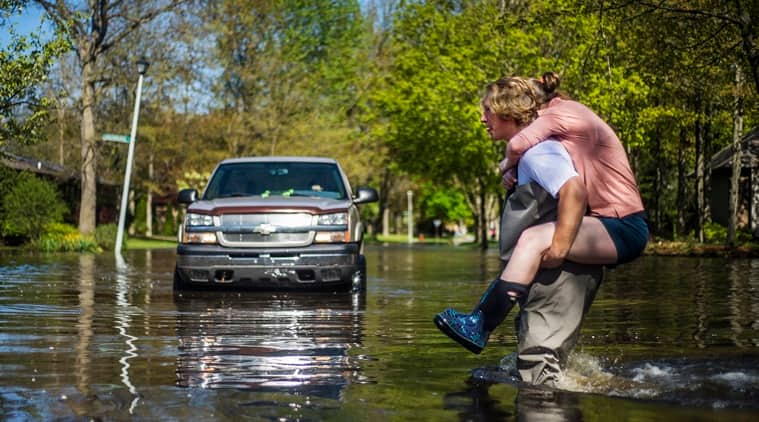 
Ryan Stadelmaier, 16, gives a piggyback ride to his sister Rachel Stadelmaier, 27, as they cross Walden Woods Drive while helping residents tend to their flooded homes, Wednesday, May 20, 2020, in Midland, Mich. (Katy Kildee/Midland Daily News via AP)

It took seven years to settle on a plan for cleansing two rivers and floodplains polluted with dioxins from a Dow Chemical Co. plant in central Michigan. The work itself has lasted nearly twice as long, with plenty still to do.

Now, scientists and activists fear some of the progress may have washed away with floodwaters that overwhelmed two dams this week, chasing 11,000 people from homes in and near Midland, the company’s headquarters city.

The Tittabawassee River flows past the Dow plant and eventually meets the Saginaw River, which continues into Lake Huron’s Saginaw Bay. That 50-mile stretch is tainted with dioxins —highly toxic compounds that researchers say can damage reproductive and immune systems and cause cancer.

Hunter Klich, 14, maneuvers a kayak down the middle of Walden Woods Drive, Wednesday, May 20, 2020, in Midland, Mich., as residents coped with flooding. (Katy Kildee/Midland Daily News via AP)

The area is on the federal Superfund list of hazardous sites. Regulators and company officials said Thursday it was too early to tell whether the swollen river had damaged spots that had been repaired or swept pollutants farther downstream.

Dow said it would inspect each cleanup location as floodwaters recede and sample for new contamination. The projects “held up remarkably well” during a 2017 flood —and we are confident that we will see a similar outcome this time,” spokesman Kyle Bandlow said.

John Kraft, an engineer for The H Hotel, wades through floodwater in the hotel’s underground parking garage, Wednesday, May 20, 2020, in Midland, Mich. (Katy Kildee/Midland Daily News via AP)

The U.S. Environmental Protection Agency said it would team with the Michigan Department of Environment, Great Lakes and Energy to evaluate any chemical releases from the plant, although Dow had reported none.

Damage from the flood three years ago was “minimal” and required only minor repairs, EPA’s regional office in Chicago said. But a similar outcome is unlikely after this week’s considerably bigger flood, said Allen Burton, a professor of environment and sustainability at the University of Michigan.

“There’s no reason to expect that everything would remain in the same place after a massive flood like this,” Burton said.

“No scientist out there would predict that will happen.”

“You can think you’ve contained toxic chemicals to a limited area, but a flood can scour that up and move it,” Olson said.

“We saw that with Katrina. What happened there is exactly what we’re worrying about happening in Midland.”

In a report last year, the Government Accountability Office said EPA should take additional steps to safeguard Superfund sites from the effects of climate change, including flooding that might result from heavier downpours.

It said 60 percent of Superfund sites not on federal property were vulnerable to floods, storm surge, wildfires, and sea level rise associated with global warming. Dioxins are byproducts of some of the hundreds of chemicals manufactured over the years at the Dow plant, which began operating in 1897.

It now produces silicones used in a variety of home and personal care products and electronics. The plant also has a small nuclear reactor, used for research, Bandlow said.

Kylie Yancer, 11, grabs a sweater from a neighboring porch as she helps her mother Melissa McCann and aunt Kendra Tucker, all of Sanford, as they search through flood waters to locate family heirlooms and other belongings, Thursday, May 21, 2020, in Sanford, Mich. Flooding overwhelmed two dams, submerged homes and washed out roads in Central Michigan. The second story of the house is by McCann’s aunt and uncle, pictured at back, which was caught in a line of trees about 100 yards away from the house’s original foundation. (Jake May/MLive.com/The Flint Journal via AP)

Dow notified the U.S. Nuclear Regulatory Commission on Tuesday that it had been shut down earlier because of the coronavirus pandemic. Liquid wastes containing dioxins from the plant were dumped into the river in the early 20th century.

The compounds later were incinerated, producing air pollution that settled into sediments, riverbanks and floodplains over decades.

Their discovery along the Tittabawassee River in 2000 sparked a lengthy clash between Dow, regulators and environmental groups over the seriousness of the problem and how to fix it. Dow began cleanup in 2007, supervised by EPA.

The Tittabawassee and its banks were divided into seven segments. The first five are mostly complete. Work on the remaining two began last year. Thousands of cubic yards of contaminated sediments have been removed and banks have been stabilized.

In areas where digging up the dioxins was judged too difficult or impractical, tainted soils were covered with protective mats and deep-rooted plants.

RBI Cuts Rates To Lowest Since 2000 To Revive Shrinking GDP

Did spotlighting a rare potential vaccine side effect put more at risk?