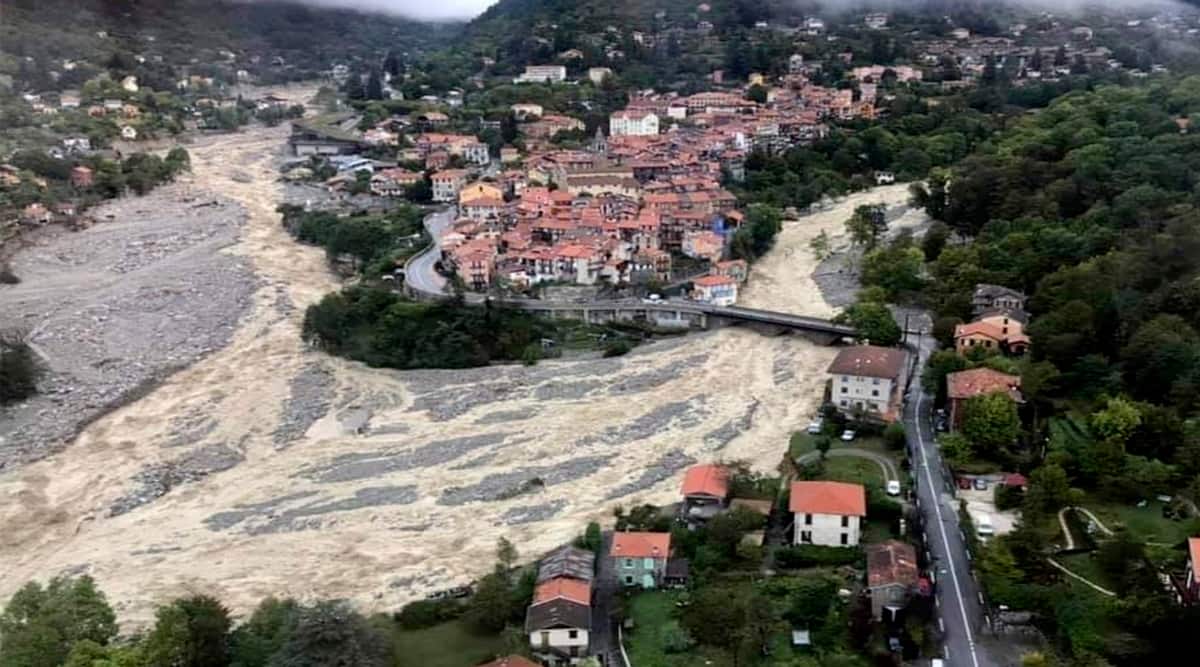 
A total of 12 deaths have been reported since the storm pounded France’s Alpes-Maritimes region and Italy’s northwestern regions of Liguria and Piedmont starting Friday – four on the French side, eight on the Italian side. Local authorities have said cemeteries in the French towns of Saint-Martin-de-Vesubie and Tende were partially washed out by the floods. (SDIS 06 via AP)

The grim job of searching for flood victims in Alpine villages and on the nearby French and Italian coasts has grown even more gruesome: Along with storm casualties, authorities say corpses from cemeteries have also been found around the Mediterranean shore, apparently swept down the mountain by violent rains.

A total of 12 deaths have been reported since the storm pounded France’s Alpes-Maritimes region and Italy’s northwestern regions of Liguria and Piedmont starting Friday – four on the French side, eight on the Italian side.

More than 600 rescuers and others were searching Tuesday for some 20 people still missing, according to a spokeswoman for the Alpes-Maritimes regional administration.

Corpses unearthed from cemeteries have washed up on the Italian side, she told The Associated Press. She could not say how many or where they came from, and it was unclear whether the bodies were among the eight reported dead in Italy from the storm. Italian local authorities could not immediately be reached for comment.

The cemetery corpses were in such an advanced state of decomposition that they were clearly distinguishable from recent storm victims, the French spokeswoman said.

Local authorities have said cemeteries in the French towns of Saint-Martin-de-Vesubie and Tende were partially washed out by the floods.

Tende Mayor Jean-Pierre Vassallo told Le Parisien newspaper that the village cemetery “was cut in two” and bodies were unearthed.

Forensic police working to identify the dead are among the security forces, firefighters, rescue divers and others helping Tuesday in the continuing search and cleanup effort, according to a spokesman for France’s national gendarme service.

Police are going door-to-door to check on people reported as missing in hamlets where roads, electricity, communications and water supplies were cut off by the storm, the spokesman said.

Neither spokesperson was authorised to be publicly named according to official policy.

Some roads were still blocked by debris Tuesday, so helicopters are delivering supplies to cut-off populations.

“It’s a catastrophic situation, this has not happened in a thousand years,” said Georges Pomarede, a retired police officer clearing out his home in the town of Breil-sur-Roya. “All of that is gone, no more campground, no stadium, no more swimming pool, no more shops, a hotel is gone, … entire houses swallowed by the floods. It’s a phenomenal disaster.”

CDC will not investigate mild infections in vaccinated Americans

Father, son used-car sellers get $5 billion richer in a day

Republican National Convention 2020: When, where to watch, and what to expect