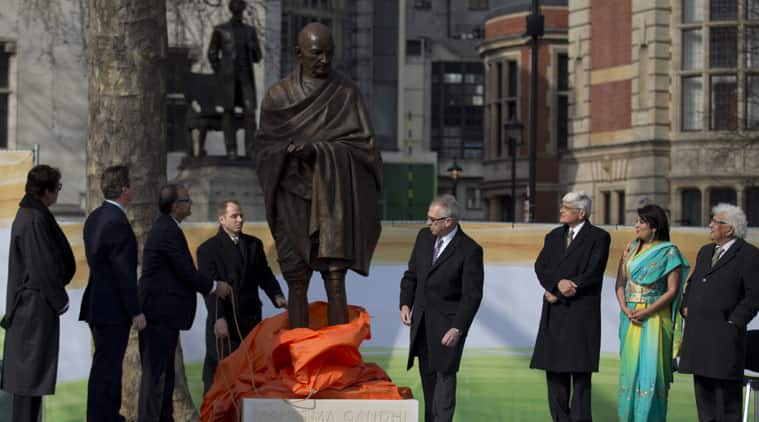 The statue of Mahatma Gandhi in London’s Parliament Square is among several monuments being covered and boarded up here ahead of another set of planned protests, which erupted after the custodial killing of African-American George Floyd.

The steps below Gandhi’s statue and the sculpture of former UK Prime Minister Winston Churchill nearby were among those targeted with graffiti during anti-racism Black Lives Matter protests last weekend, which ended in violent clashes between demonstrators and police officers on duty.

More clashes are feared this weekend as anti-racist groups as well as far-right bodies are planning rival demonstrations in the UK capital.

“The statue of Winston Churchill in Parliament Square is a permanent reminder of his achievement in saving this country” and the whole of Europe “from a fascist and racist tyranny,” UK Prime Minister Boris Johnson said in a Twitter statement, as he urged people to stay away from further protests amid fears of more violence.

“It is absurd and shameful that this national monument should today be at risk of attack by violent protestors. Yes, he sometimes expressed opinions that were and are unacceptable to us today, but he was a hero, and he fully deserves his memorial,” he said.

Johnson said that while he understands the “legitimate feelings of outrage” at the custodial death of Floyd, a 46-year-old man who died after a white police officer knelt on his neck in Minneapolis on May 25, the protests held in the UK in solidarity have been “hijacked by extremists” intent on violence.

London Mayor Sadiq Khan also urged Londoners to stay away from the protests, with fears of clashes between anti-racism and far-right demonstrators.

“I’m extremely concerned that further protests in central London not only risk spreading COVID-19, but could lead to disorder, vandalism and violence. Extreme far-right groups who advocate hatred and division are planning counter-protests, which means that the risk of disorder is high,” said Khan.

“Be in no doubt these counter-protests are there to provoke violence, and their only goal is to distract and hijack this important issue. Staying home and ignoring them is the best response this weekend,” he said.

Khan confirmed that the Metropolitan Police were working on a “robust” policing plan to keep Londoners safe and to prevent disorder, including covering up key landmarks.

“Together with our partners, we are ensuring that key statues and monuments at risk, including the Cenotaph, Winston Churchill and Nelson Mandela, are covered and protected,” he said.

The Mayor’s office confirmed that Gandhi’s statue is also among the monuments being protected. Graffiti with the word “racist” near the statue at Parliament Square, which wasn’t on the actual plinth as in the case of Churchill’s sculpture, had evoked some anguish on social media among Indian diaspora groups.

Since then, a new petition calling for the removal of another Gandhi statue in the UK city of Leicester has attracted thousands of signatures, also triggering countering reactions.

“Gandhi has shown us that organised peaceful resistance can be a force for change,” said Claudia Webbe, the local Labour Party MP for Leicester East, as she threw her support behind the city’s statue.

Leicester City Council has said the petition calling for its removal will be “considered” as part of a wider review of the city’s statues, street and building names, an exercise being conducted by different local authorities across Britain in the wake of the Black Lives Matter protests targeting specific statues seen as reminiscent of Britain’s slave trading and colonial past.

‘Very explosive’, ‘What a spectacle’: How the world is reacting to delayed US election results