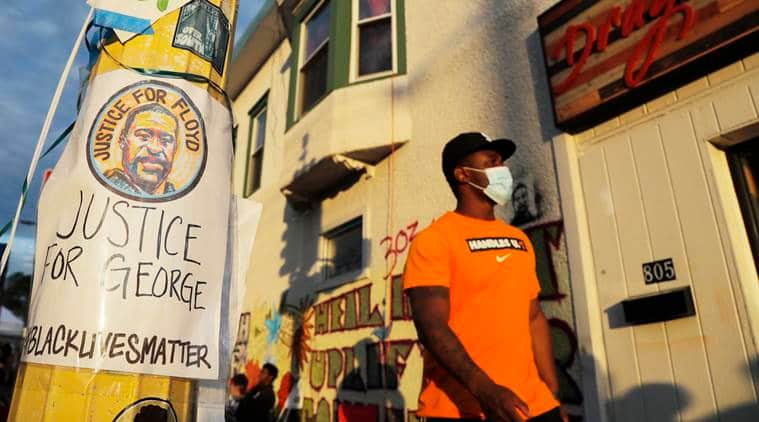 Chauvin, who has been dismissed from the police force, appeared via video link from the Minnesota state prison. He is also charged with one count of third-degree murder and one count of second-degree manslaughter.

His bail was set at $1-1.25 million (roughly €885,000-1.1 million). Minnesota Assistant Attorney General Matthew Frank argued that the “severity of the charges” meant it was likely that Chauvin may try to run away if put on bail.

This marks Chauvin’s first court hearing before the trial gets underway. His next hearing was scheduled for June 29.

Floyd’s body was put on display at an open casket in Houston Texas on Monday ahead of his funeral on Tuesday. Hundreds lined up to view the body and US Democratic presidential nominee Joe Biden said he had visited Floyd’s family.

Some of the mourners drove hours to attend the viewing. Before the body arrived, workers outside the church set up a large floral arrangement with the letters “BLM” for Black Lives Matter.

Three other police officers who were with Chauvin when Floyd was arrested have been charged with aiding and abetting the killing and are still being held in a local jail. All four were fired the day after Floyd’s killing.

Chauvin’s court appearance took place as US lawmakers unveiled proposed police reform legislation in Washington D.C., albeit without much chance of getting it past the Senate and the president’s desk.

Hong Kong, Tokyo among world’s most expensive cities for expats

‘You can’t trust anyone’: Russia’s hidden Covid-19 toll is an open secret

Number of US soldiers may increase in Afghanistan before complete withdrawal of troops: Pentagon

Suspect in Nashville explosion died in blast: US officials