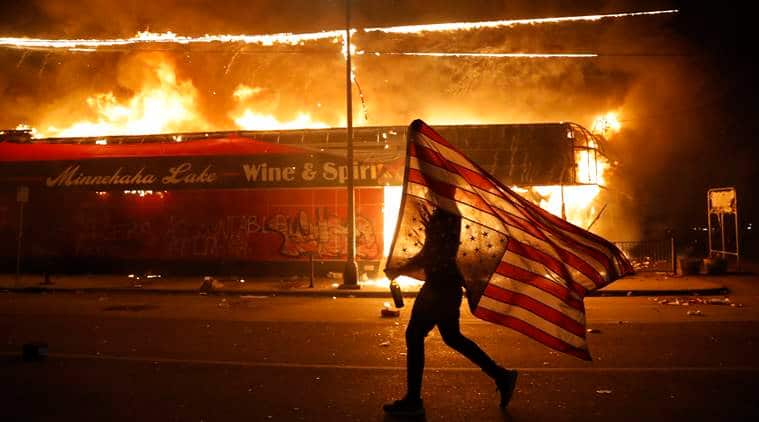 
A protester carries a U.S. flag upside, a sign of distress, next to a burning building Thursday, May 28, 2020, in Minneapolis. Protests over the death of George Floyd, a black man who died in police custody Monday, broke out in Minneapolis for a third straight night. (AP Photo/Julio Cortez)

As widespread protests against the killing of George Floyd by a Minneapolis police officer continue to spread across the United States for the fifth consecutive day, at least 25 cities across 16 US states have imposed curfews. Police have arrested nearly 1,400 people in 17 cities, AP reported on Sunday. More than 500 of these arrests were recorded in Los Angeles, where a state of emergency has been declared.

Two days after the arrest of Minneapolis Police officer Derek Chauvin, who was seen in a video pinning down 46-year-old African-American George Floyd with his knee and suffocating him while he was in police custody, violence and destruction continued across the United States.

After mass public outrage escalated into riots and looting, curfews were imposed in cities across the US — including, Atlanta, Seattle, Los Angeles, Chicago, Philadelphia, Columbus and Minneapolis, among others. The governors of Minnesota, Georgia, Ohio, Washington and Kentucky have mobilised their state National Guards to restore order, CNBC reported.

Read| Explained: Why George Floyd’s death has sparked violent protests in the US

Just been detained and searched by #Minneapolis Police. They cuffed my cameraman and our security but were respectful and have now let us go @9NewsAUS pic.twitter.com/8ZYDk0D8gq

Over 4,100 citizen-soldiers and airmen have been deployed in Minnesota and 10,800 National Guard members are expected to join the crackdown on violent protestors, the MN National Guard announced in a tweet.

We now have more than 4,100 — quickly moving toward 10,800 — Minnesota Citizen-Soldiers and Airmen supporting our friends and neighbors in the Twin Cities. This is a significant increase over the 700 on-duty Friday. We live here. We work here. We serve here. We’re all in. pic.twitter.com/WorKOI9ZCa

In Washington, protestors clashed with police, set fires and vandalised buildings near the White House. Praising the conduct of the Secret Service Officials who contained the violence outside the White House, US President Donald Trump tweeted, “They let the “protesters” scream & rant as much as they wanted, but whenever someone….got too frisky or out of line, they would quickly come down on them, hard – didn’t know what hit them.”

The professionally managed so-called “protesters” at the White House had little to do with the memory of George Floyd. They were just there to cause trouble. The @SecretService handled them easily. Tonight, I understand, is MAGA NIGHT AT THE WHITE HOUSE???

In Detroit, a 19-year-old man was allegedly shot dead by an unknown suspect who opened fire on a group of demonstrators. The shooter quickly fled the scene, while the victim was taken to a nearby hospital where he was pronounced dead.

Protestors in Chicago and New York city gathered outside the Trump Tower buildings in both cities to protest against police brutality. As many as seven people were arrested outside Trump Towers in Manhattan as protestors obstructed traffic by filling the streets, according to a report by The New York Times. Several police vehicles were spray painted and vandalised, and police officials were attacked in Chicago, as per reports.

Health experts fear a new wave of COVID-19 cases as thousands of protestors flout social distancing guidelines in the US, which has recorded the highest number of cases in the world. Over 1.7 million coronavirus cases have been recorded in the United States, while over 100,000 people have succumbed to the virus in the country.

In a handful of American states, early data hint at a rise in breakthrough infections

Sicily records highest ever temperature in Europe; one dead as wildfires rage in southern Italy