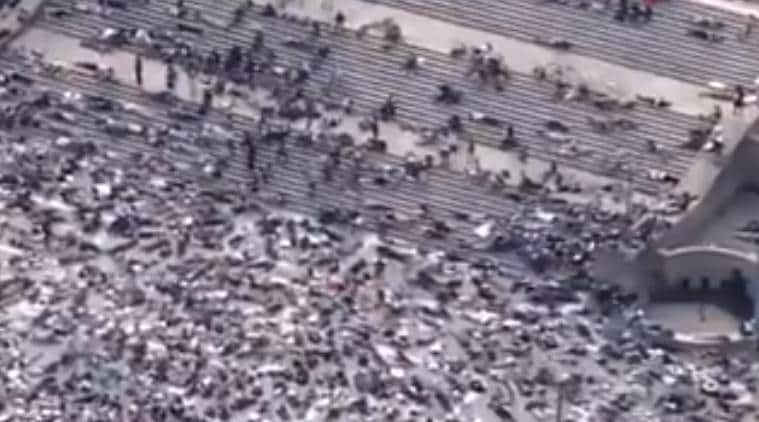 As a mark of protest against the police brutality on African-Americans in the US, demonstrators Friday staged a die-in on the ‘Rocky Steps’ leading up to the entrance of Philadelphia Museum of Art.

A video shared by the ABC news on its Twitter handle shows thousands of protesters lying still as dead on the 72 stone steps in front of the art museum in Pennsylvania as a mark of a peaceful protest against inequality and racism triggered by the murder of 46-year-old George Floyd in police custody.

Demonstrators staged a die-in on the “Rocky Steps” leading up to the entrance of the Philadelphia Museum of Art. https://t.co/QKh6cmD69D pic.twitter.com/n9eZFEA3by

Floyd, an African American man, died in Minneapolis on Monday while he was being restrained by the police. Video footage of the incident, which went viral on social media platforms, showed an officer kneeling on Floyd’s neck as he gasped for breath.

Four policemen have since been fired, and the Federal Bureau of Investigation (FBI) has been called in to conduct a federal civil rights probe. The officer who pinned him to the ground, Derek Chauvin, has been charged with third degree murder.

The death has triggered violent unrest in Minneapolis, leading to a state of peacetime emergency being declared in Minnesota state as well as the activation of its National Guard. Protests have also taken place in other parts of the US, including in California, New York, Ohio and Colorado. The incident once again brought to the fore concerns over the law enforcement’s bias against the African American minority, with Floyd’s death being cited as the most recent incident of racially-driven police brutality.

Something in the water: Environmental pollutant may be more hazardous than previously thought