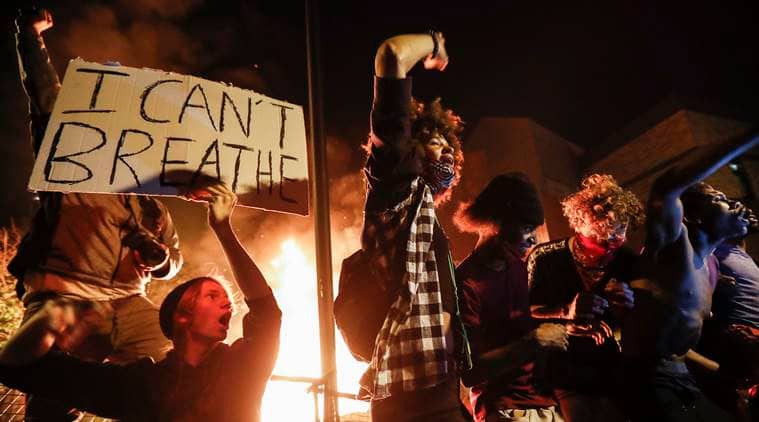 
Protestors demonstrate outside of a burning Minneapolis 3rd Police Precinct, Thursday, May 28, 2020, in Minneapolis. (AP Photo)

The front of a police precinct in Minneapolis, Minnesota was set ablaze by an angry mob on Thursday night as protests raged following the death of George Floyd, an unarmed black man who died in police custody earlier this week. More than 500 National Guard soldiers have been deployed to help restore order after the state witnessed two consecutive days of violent protests, BBC reported.

Rallies broke out across the US following the death of 46-year-old Floyd, who, in a video filmed by a bystander, was seen struggling to breathe as a Minneapolis police officer pinned him to the ground with his knee for several minutes until he stopped moving. While the four police officials involved in Floyd’s death were fired soon after the incident, hundreds of protesters took to the streets demanding their arrest.

What started as a peaceful protest amid the ongoing COVID-19 pandemic, quickly escalated into mayhem as reports emerged of property being vandalised, buildings and vehicles being set ablaze and local businesses being looted. Minneapolis police on Tuesday began firing tear gas and rubber bullets to disperse crowds of protesters, as per reports.

The Minneapolis Police Department’s 3rd precinct was engulfed in flames on Thursday after protesters stormed the building and allegedly ignited several fireworks. The police station had become the centre of unrest, as it was believed that the officer accused of killing Floyd previously worked here.

A police spokesperson confirmed that staff had been evacuated from the 3rd precinct station, soon after videos began to surface on social media in which a cheering mob was seen setting the building ablaze. In a mall close to the police station, the windows of almost every store had been smashed, AP reported.

103,000 people dead, 35% unemployment, Minneapolis is burning, the Denver protesters are being fired upon and the madman in the White House is tweeting out dog whistles for extrajudicial murder a 1am.
Tired of all the winning, ashamed of your America yet?#GeorgeFloydprotest pic.twitter.com/oFLu2A9cyl

Addressing the level of destruction in the state, Minnesota Governor Tim Walz announced that the state’s National Guard was being deployed to control the crowds. “Unfortunately, some individuals have engaged in unlawful and dangerous activity, including arson, rioting, looting, and damaging public and private property,” Walz said in a statement. “These activities threaten the safety of lawful demonstrators and other Minnesotans, and both first responders and demonstrators have already been injured.”

On Thursday, lawmakers and legislators at the Capitol building in St Paul were asked to evacuate as demonstrators began to forcibly enter stores nearby. An auto parts store, close to the capitol building, was seen in flames hours later.

While acknowledging the outrage spurred by the death of Floyd, Minneapolis mayor Jacob Frey urged the community to help restore peace in the city. “In believing in our city, we must believe we can be better than we have been. We must restore the peace so we can do this hard work together,” Frey said in a press briefing on Thursday.

Floyd’s family have demanded that the four police officers implicated in his death face murder charges.

Reacting to the protests in Minneapolis, US President Donald Trump on Friday criticised Mayor Frey and assured his support to the people of the state. “I can’t stand back & watch this happen to a great American City, Minneapolis. A total lack of leadership,” Trump tweeted.

I can’t stand back & watch this happen to a great American City, Minneapolis. A total lack of leadership. Either the very weak Radical Left Mayor, Jacob Frey, get his act together and bring the City under control, or I will send in the National Guard & get the job done right…..

The US President called the protesters “thugs” and suggested military intervention, warning that additional violence is likely over the next few days.

“Weakness is refusing to take responsibility for your own actions. Weakness is pointing your finger at somebody else during a time of crisis. Donald Trump knows nothing about the strength of Minneapolis.” — Mayor Frey reacts to the president’s tweets. pic.twitter.com/PVxfoH7yZw

Further, according to BBC, White House press secretary Kayleigh McEnany told reporters on Thursday that President Trump “was very upset” when he saw the footage of Mr Floyd’s death. “He wants justice to be served.”

On Thursday, a small group of protesters had gathered outside the home of Attorney Mike Freeman, who will be handling the case, to demand the arrest of the four police officials involved, Al Jazeera reported.

“We just can’t rush this,” Al Jazeera quoted Freeman as saying during a press briefing. “These need to be done right. Please give me and give me the United States attorney time to do this right and we will bring you justice.”

Representatives from the US Department of Justice, as well as the FBI on Friday promised protesters a swift and thorough investigation.

Protests breakout across the US

As the US reels from the impact of the global coronavirus pandemic, protesters defied lockdown rules by gathering in different parts of the country after Floyd’s death. According to a report by NBC, several fights broke out between police and protesters in New York on Friday, when over 100 people gathered at Union Square. More than 40 people were arrested, as per reports.

Chants of ‘I can’t breathe’ — the words spoken by Floyd when he was pinned to the ground — echoed through the streets as similar protests were seen in Denver, Louisville, Los Angeles and other cities across the United States.

In greenwich Village New York City protest for George Floyd is escalating as multiple arrests, and officer is injured. pic.twitter.com/EsGdZVPGml

For many, the protests in Minneapolis are reminiscent of similar rallies that were seen in Ferguson, Missouri six years ago after 18-year-old African American student Michael Brown was shot and killed by a police officer.

With over 1,720,000 COVID cases, the United States is the worst-hit by the global pandemic in the world. As many as 101,617 deaths have been recorded in the country so far.

Here's How You Can Make Pizza In A Mug From Scratch, Under 5 Minutes

Protest in Mauritius over oil spill, dozens of dead dolphins