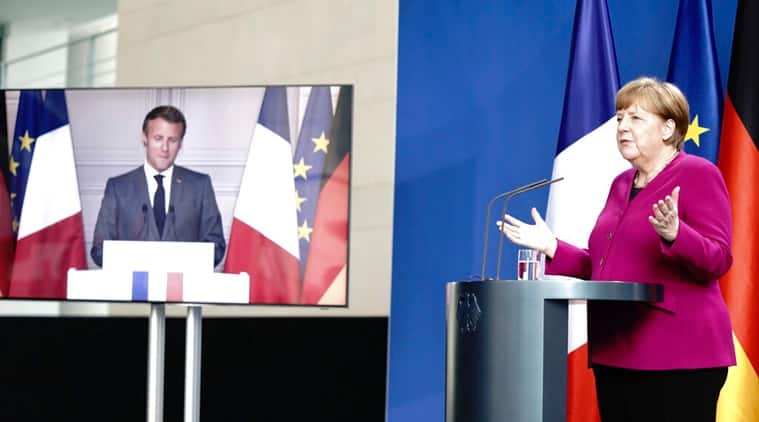 
German Chancellor Angela Merkel talks to French President Emmanuel Macron, connected by video, during a press conference after a joint video conference in Berlin, Germany, Monday, May 18, 2020. One topic was the corona pandemic and its consequences. (Kay Nietfeld/dpa via AP)

In a joint statement, German Chancellor Angela Merkel and French President Emmanuel Macron said the fund would see European Union budget money used to help sectors and regions that are particularly affected by the outbreak.

Macron said that under the proposal, the 27 EU countries would use their collective weight to borrow money on financial markets. “We are proposing to do real transfers (of money) … that’s a major step,” he said Monday.

The two leaders said they will seek a “swift agreement” from other EU members for the proposed recovery fund, which is likely to run into resistance from fiscal hawks in the bloc such as the Netherlands.

Explained: The ‘travel bubble’ idea that many are pinning hopes on

Germany, too, has long resisted the idea of joint borrowing, but Merkel said that “because of the unusual nature of the crisis we are choosing an unusual path.”

There has been concern in European capitals that the pandemic and the bloc’s initial uncoordinated response to it could boost anti-EU sentiment in member states.

Macron acknowledged that a French-German deal alone doesn’t mean an agreement from the 27. The EU’s executive Commission will soon make its own proposal to EU member states and “we hope that the French-German deal will help,” he said.

European Commission President Ursula von der Leyen welcomed the proposal. “It acknowledges the scope and the size of the economic challenge that Europe faces, and rightly puts the emphasis on the need to work on a solution with the European budget at its core,” she said.

Merkel stressed that the fund should be seen as a “one-off effort”. “The goal is for Europe to emerge from the crisis stronger,” she said.

Alaska talks: Is the US trying to turn China into a pariah?

US jobless claims drop to 385,000, another pandemic low

World leaders talking to Biden about the virus, other issues