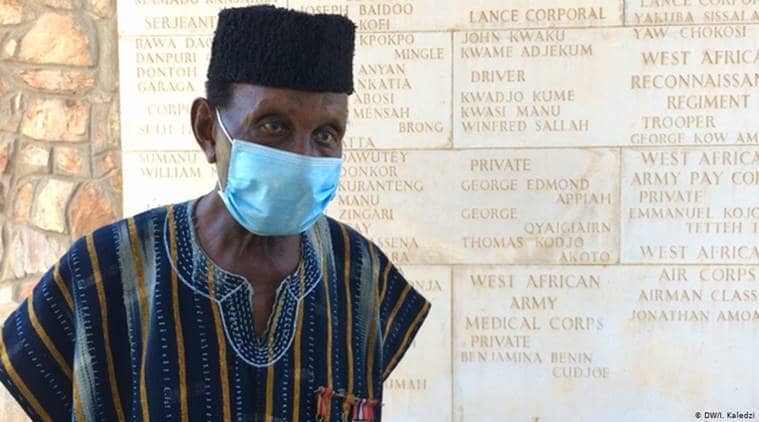 Joseph  Hammond fought with the British army between 1939-1945 in Myanmar (formerly Burma), where he was a private in the Gold Coast Regiment of the Royal West African Frontier Force. He is the only survivor of his Ghanaian regiment who fought in WWII.

World War II veteran Joseph Hammond looked sprightly as he finished the final leg of his fundraising walk through the Ghanaian capital, Accra, on Monday, completing 2 miles (3.2 km) a day for seven days.

As he strode towards to his home in the bustling Accra neighborhood of Osu, Hammond received cheers and claps from well-wishers who had come to celebrate the end of his fundraising event, which was timed to fall on Africa Day on May 25.

Hammond has so far raised $18,000 (€16,400). This will be used to purchase personal protection equipment (PPE) for front-line workers and veterans in Ghana and other African countries who are part of the Commonwealth.

Ghana has more than 6,800 confirmed cases of coronavirus as of Tuesday, May 26.

The lively 95-year-old was inspired by another WWII veteran, Tom Moore from Britain, who raised $40 million for UK front-line health workers in a similar way.

“Like what Colonel Moore did in Britain, I also have embarked on this thing to raise more money,” he told DW on the last day of his walk. “Also, I thought being a veteran like himself, I am doing it for the whole of Africa.”

Hammond fought with the British army between 1939-1945 in Myanmar (formerly Burma), where he was a private in the Gold Coast Regiment of the Royal West African Frontier Force. He is the only survivor of his Ghanaian regiment who fought in WWII.

He believes the threat of COVID-19 is deadlier than the enemy he fought more than seven decades ago.

“We went to physical war in … Burma, you could see the enemy and plan your strategy during the war how to defeat him,” he said.

“But this is another kind of war. It is an invisible war. You don’t see the enemy. The enemy keeps attacking you.”

Hammond’s story and desire to help in the fight against the novel coronavirus received support from several prominent personalities, including Ghanaian musician Okyeame Kwame and the actors Prince David Osei and Van Vicker who accompanied the veteran for part of his walk.

“Ghana has a very strong community spirit and that is great to see that initiatives like this that I am certainly keen to support in any way I can,” Walker told DW during the walk.

Veteran Hammond says his motivation is driven by love for his country and the African continent.

“If you love your country you will do it … I don’t bother that I am 95 years and to sit down and sleep over this, I will do it and we will succeed,” he said.

During his seven days of fundraising, Hammond — wearing a mask — chatted with people who joined him along the way about the history of the Ghana, his war-time experiences and what happened when he came home.

His last day of walking took Hammond to the Osu cemetery where hundreds of tombs serve as memorial for all of Ghana’s fallen war veterans. Some 65,000 Ghanaians were under the command of Britain officers in World War II.

As the last remaining WWII veteran in Ghana, Hammond said it was difficult not being able to talk of his memories of the war with someone who shares his experiences.

“All that we did during the war, it comes back,” he said. “It is printed on my memory. It comes back, crossing river, shooting somebody, somebody dies. All these things the memories flocks back and I see it like a video film before me. It can never stop until I am dead.”

Although his seven days of walking are over, Hammond is still calling for more donations to reach his funding target of €563,000

For him, nothing will stop him from playing his little part in defeating COVID-19 on behalf of his deceased war comrades.

TikTok’s Rating Back to Normal as Google Removes Negative Reviews