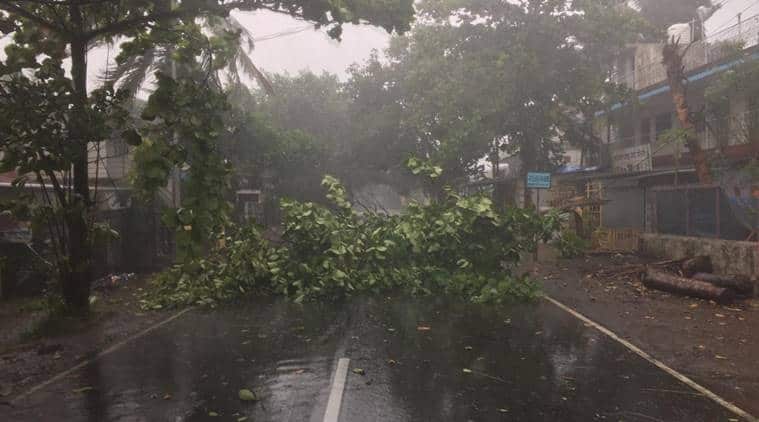 The beachtown was prepared for the worst on Wednesday morning – doors were shut, windows bolted, shops shuttered, roads empty and vehicles parked safely.

As cyclone Nisarga, categorised as a severe cyclonic storm, made landfall just south of Alibag in Raigad at 12.30 pm, the winds in excess of 100 kmph uprooted trees, bent power lines, rattled roofs, sent debris flying and showered the streets with coconuts and mangoes.

A 58-year-old man, Dashrath Babu Waghmare, was killed at Umate village in Alibag taluka after an electricity pole fell on him when he stepped out to have a look at his shop. An accidental death report has been filed at Revdanda police station.

Beginning Tuesday morning, local authorities had evacuated more than 6,000 people living in the Koliwada at Alibag beach and the beachfront pockets of Mithpada, Shastri Nagar and Siddharth Nagar, to temporary shelters at government and private schools.

Suresh Dhole and Santosh Rathod, lifeguards at Alibag beach, said that it took the police, the Alibag Municipal Council (AMC) and the National Disaster Response Force hours to complete the evacuation exercise.

At one such shelter – KES General Arunkumar Vaidya High School – 467 evacuees were served dinner, breakfast and lunch and provided mattresses to sleep, before being allowed to leave at 5 pm, once the rain and winds had subsided, said Mahesh Dafal, city engineer of AMC.

However, evacuated residents found lanes leading to their homes blocked by large trees. At the fishing village, 20 members of Milind Bhagat’s joint family, who had sought shelter with relatives in the town, returned in the evening only to find the roof of their house blown away and deep cracks in the brick columns.

“If our house was made of reinforced cement concrete, it would have withstood the winds. But now the walls shake even when we touch them,” said Milind, whose father and uncles had built the house 15 years ago.

Having surveyed the damage and found all their possessions either smashed to bits or wet beyond repair, the family has decided it is not safe to live there anymore. “There is no telling when the whole thing will come crashing down,” Milind said.

Less than half the village’s residents have returned, with some still choosing to remain in safer locations. “Those who came back earlier said that roofs from other homes in our lane flew all the way to the neighbouring fishing village,” Milind added.

A few homes down his house, 30-year-old Sona Chavan has returned to her dark home with her five children. Her husband, a driver, is stuck in Panvel due to a blocked road. “The metal sheets on the roof are loose and flapping in the wind. The noise is scaring the children,” she said.

Sona was able to feed her children at the temporary cyclone shelter on Tuesday but is now out of ration for dinner.

Pravin Bhagat, whose one-storey home is surrounded by towering coconut trees and lies at the mouth of a lane leading to the Koliwada, said that he had never experienced such winds before. “Watching those coconut trees swaying dangerously made me really nervous.

Across town, the Maharashtra State Electricity Board disconnected the town’s power supply at 10 am. With falling trees also taking electricity cables with them, residents have been told not to expect supply to resume until Thursday. The police and municipal council had also warned residents to stay indoors, a call, said Dhole, that the people heeded.

At the beach, visibility gradually reduced as the cyclone made landfall in the afternoon. The famous Kolaba Fort, which local residents and visitors can walk to when the tide is low, disappeared from view. Food stalls and a giant wheel that had been lying empty since the lockdown began, were also badly damaged by the winds. The owner of the stalls and amusements, who stay in the Koliwada and are watched the profitable summer tourist season from their home, were safe.

It was also a day of close shaves. Electrician Deepak Raut and his family were saved after a tree behind their home missed them by inches. “The tree was huge. It would have been crushed flat,” he said, crediting the Jama Masjid across the road from his home, in Alibag’s Bazarpeth area, for the escape.

Once the cyclone blew over though, residents poured out on foot and bikes to take pictures and videos of their damaged town and pick up fallen coconuts and mangoes by the dozen.

The town emerged unscathed, said Pravin, because people had not ignored warnings from the police and municipal council. Gesturing at a large banyan tree lying uprooted outside his porch, he added, “The cyclone caused so much damage while passing by. Imagine what would have happened if we had felt its full force.”

People are avoiding the ER during COVID-19 crisis at their peril: study