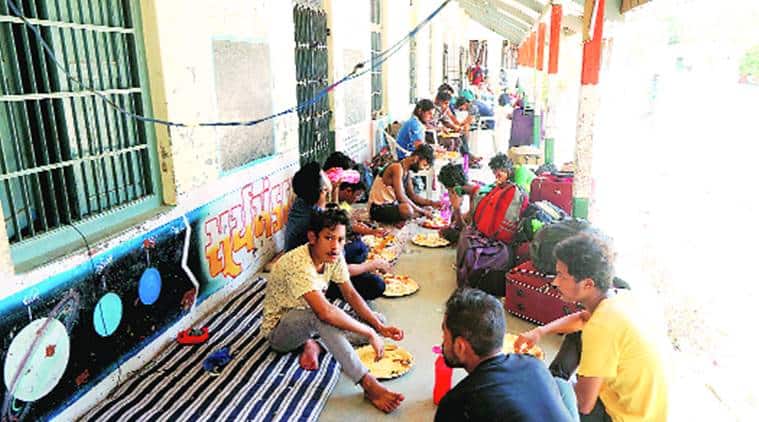 
Residents of Assam and Manipur at a primary school in Bhayli. (Photo: Bhupendra Rana)

Around 80 residents of Assam and Manipur who were expected to board a train to their home states from Bharuch late on Saturday were stranded after they were not allowed to board. According to officials, the train, with a capacity of 1,200 passengers, left on Saturday with 750 passengers on board as against the 900 to whom tickets were issued.

The Bharuch district administration claimed that the passengers arrived late and missed the train.

“The train was scheduled to depart at 11 pm. It departed almost an hour later. But the passengers from Vadodara arrived late and their documents could not be verified on time. we could not hold the train beyond a point,” said NR Prajapati, sub-district magistrate, Bharuch.

Meanwhile, the Vadodara administration claimed that they had sent the passengers on time and there is no clarity from Bharuch as to why they weren’t allowed to board. “We had completed verification here and had sent everyone via buses to Bharuch. But we do not know why they were not allowed to board the trains. There is no official intimation from the Bharuch district administration on the same yet. As soon as they arrived here, we have accommodated them at a shelter home,” said RP Joshi, Deputy Collector, Vadodara.

One of the passengers, Mayuri Duarah (22), who works at a restaurant here in Fatehgunj area and is a native of Sivasagar in Assam, told this newspaper, “We had filled the required forms and were asked to assemble at the Narmada Bhavan on Saturday around 3 pm. Around 7 pm, we boarded the bus to Bharuch from where we were supposed to board the train. We paid Rs 200 for the bus ride in addition to the amount paid for the train tickets. We arrived at Bharuch around 10 pm. At the Bharuch station we kept waiting, but there was no intimation. At around 1.30 am, we were told that we can not board the train and we should return to Vadodara. They provided us a bus and ferried us here to a shelter home.”

All of them were brought to a government run primary school in Bhayli in Vadodara “We reached here at 5.30 am and there was no intimation on further course of action. We have not been informed yet when we can go home,” said Mohammad Akmal (18), native of Manipur and studying at the Darul uloom Madrassa in Tandalja area of the city.

The passengers claimed that they were not being allowed to return their respective accommodations in the city as well. The administration, however, maintained that they can only be allowed to leave the premises if they have any person to take responsibility.

“We cannot let anyone leave the premise. If they have a guardian here who can come and give us an undertaking, we can permit them to go. If something happens outside this premise, who will take responsibility? We will accommodate them here until there is a train to their destination states,” said Parul Varia, Talati and in charge of the shelter home.