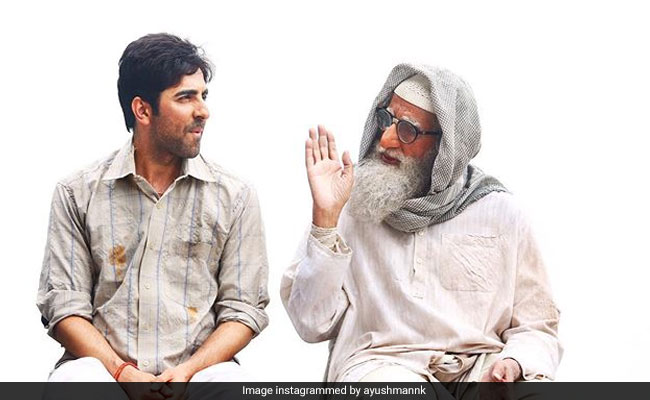 Ayushmann and Big B from Gulabo Sitabo sets (courtesy ayushmannk)

Ayushmann Khurrana, on Gulabo Sitabo‘s online promotional duties, shared an update about the film’s trailer release but it’s his thoughts about working with co-star Amitabh Bachchan that got out attention. The 35-year-old actor Instagrammed a photo of himself as the film’s character Sitabo, and Big B as Gulabo, from when they were shooting the movie. In the throwback photo, an animated Mr Bachchan (Gulabo in this case) can be seen talking to Ayushmann’s Sitabo, who in turn sports a rather indifferent expression suggesting he’s not at all interested in what Big B’s character has to say. In his caption, Ayushmann explained that the only reason he was able to sport a “don’t care” expression is because Big B was in his Gulabo avatar and not his superstar self that he is in real life.

In an ROFL promotional video later, Mr Bachchan revealed that the trailer arrives on Friday. Mr Bachchan and Ayushmann were spotted disagreeing about everything in this video about the film’s trailer launch. Director Shoojit Sircar was the middle man but little could he do.

Big B plays the role of an aged landlord (Gulabo) while Ayushmann has been cast as his tenant (Sitabo) in the movie. Mr Bachchan described the storyline of Gulabo Sitabo in these words: “Ek izzatdaar janaab aur uske anokhe kirayedar ki kahaani.”

Last week, the makers of Gulabo Sitabo announced that the film will have a digital release on Amazon Prime Video on June 12 as theatres are shut and the country is in lockdown mode. Directed by Shoojit Sircar, Gulabo Sitabo marks his third collaboration with Mr Bachchan after who films such as Shoebite, Piku and Pink.

Stuart Broad, Chris Woakes among first to return to training for England

Milind Soman’s Mom Usha Soman Celebrated 81st Birthday With These Many Push-Ups. We Can’t Even…