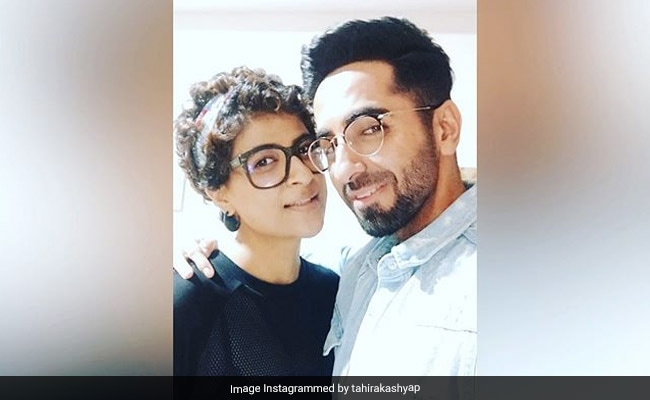 Tahira Kashyap expressed her interest in directing husband Ayushmann Khurrana. Tahira, director of short films such as Toffee and Pinni, spoke to Times of India about her future directorial ventures. Tahira said that she is taking “baby steps” to direct a feature film but with the lockdown, everything has been put on hold. Speaking of her plans for directing Ayushmann in a feature film, she said that she would “love” to work with such a “wonderful artist.” However, Tahira referred to Ayushmann as a “senior” and said that she would like to direct a few films before working with Ayushmann. Tahira said, “I would really love to work with him from the perspective of directing a wonderful artist. He has grown tremendously as an artist. But at the same time, he is senior to me when it comes to working. I need to earn myself a couple of films or a position where I deserve to direct him. I am also fretting because I don’t know how it would be because we are husband and wife too. I don’t know how the situation will be like- will there be fireworks on the set or we would be able to maintain the absolute director-actor decorum. That is something we would get to know.” Tahira also added that Ayushmann is the first one to listen to her scripts and give his feedback. They are each other’s “bouncing board.”

Tahira and Ayushmann keep setting couple goals. Earlier, after Tahira was diagnosed with cancer, Ayushmann spoke about his struggle of dealing with the news in an interview with Pinkvilla. He said that he promoted his films in the morning and went back to the hospital at night to stay beside Tahira. “In the morning I used to promote my films and go back to the hospital in the night. I was sleepless for seven nights and seven days. It was not easy but since she was positive, she inspired me a lot,” said Ayushmann.

Last year, Ayushmann fasted on Karwa Chauth for Tahira, as she was still recovering from her medical condition. Tahira shared a video on Instagram and wrote, “Embarrassing you further, Ayushmann. Our Karwa Chauth moment! While I am in Dubai for an event, my certainly better half keeps a fast for me on his set! (PS – I am still popping some pills so couldn’t fast). But how adorable are you Mr A! Love you so much.”

Ayushmann and Tahira got married in November, 2008. They welcomed their son Virajveer in 2012 and daughter Varushka in 2014.

Ayushmann was last seen in the comedy-drama Shubh Mangal Zyada Saavdhan where he shared screen space with Jitendra Kumar, Neena Gupta and Gajraj Rao. Tahira, on the other hand, sports many hats – She’s the director of short films Toffe and Pinni, a professor and a theatre director.

Aparshakti Khurana on lockdown: Very important to take care of our mental health