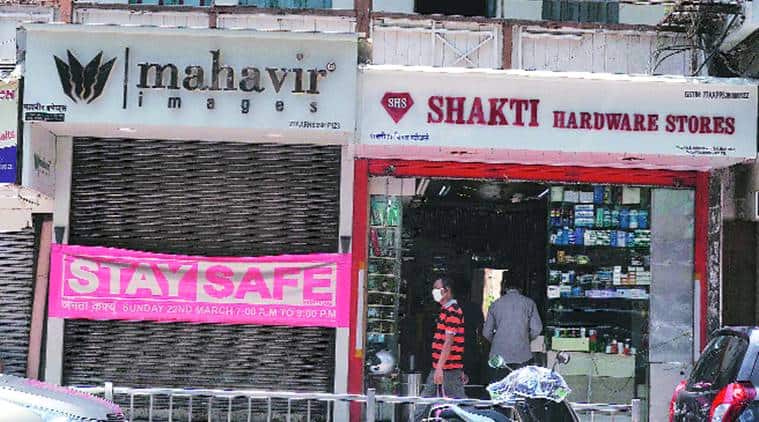 
Houses damaged due to the cyclone. (Photo: Deepak Joshi)

In Raigad district where Cyclone Nisarga made landfall on June 3 causing large scale destruction, Amar Javlekar (17) was one of the two people killed that day. His parents, staring at a heap of cement blocks, the remains of a collapsed wall of their home under which Amar was crushed to death, rue that he may have been still alive had he not gone back into their house to save a precious possession.

‘It was just the two of us at home,’ said his mother Asmita Javlekar, who has a limp after a toe injury she suffered while escaping her home, as it was being pounded by the fierce winds that Nisarga brought. ‘He went back to get our television. I don’t know why he had to do that. I wish he hadn’t,’ she breaks down, at their home in Gaulwadi village in Shrivardhan.

Amar’s father Pandharinath Javlekar’s vision is fogged by cataract. Nearly 60 year old, he works as a daily-wage farm labourer. His mother works as a house help. ‘He was my only son and he was born many years after our marriage. We are poor people but we wanted to give him a good education. We wanted him to study and do well. He had told me ‘Aai, mala police officer vhaychay (Mother, I want to be a police officer)’, she weeps.

At the mouth of the Gaulwadi village is the Gram Panchayat office that is now missing tiles on its red roof. At its door lay the remains of a large tree felled by the cyclone. Most of Shrivardhan is now a detritus of tree branches and scree along every road.

Prashant Lad, a neighbour of the Javlekars described the day of chaos that Nisarga brought to their village. ‘The boy was crushed under the cement wall. We knew he had died on the spot but how do we inform the police when people were running helter-skelter and rooftops and tree branches were flying in their faces? Phones weren’t working. I took my two-wheeler dodging fallen trees to look for policemen who were all on patrolling duties,’ said Lad.

In about an hour after its landfall at about 12:30 pm on June 3, Nisarga had wrecked havoc, destroying several villages in its path. ‘When I called for help, no one could even hear us at first. Everyone was scared for their lives,’ said Asmita.

Lad informed the police the same evening but the cyclone had made it difficult for the villagers to retrieve Amar’s body. It was pulled out the next day, ‘We cremated him the next day at our village crematorium,’ said Lad.

The Javlekar’s have now moved into a neighbour’s house. Amar’s two elder sisters, Rajani and Naina, both married, were visiting their grandmother in Mahad. They couldn’t come to see their brother one last time.

What remains of the Javlekar home is a door-frame that still holds the wooden door that reads ‘Shubh labh’. Wedged into the centre of a single bed is a chunky slab of cement.

Amar’s school bag, his mother’s sarees, utensils and an electric meter, are scattered everywhere. Somehow unscathed are plastic jars of puffed rice that sit undisturbed on a kitchen rack.

Chief Minister Uddhav Thackeray’s announcement of Rs 4 lakh compensation to the kin of those killed in the natural disaster, does little to comfort Amar’s mother. ‘He was my gold, my diamonds, my prince. In whatever way the government tries to help us, it won’t bring my son back’, she wails.

Mumbai: Deputy CM Ajit Pawar visited villages in Maval, Junnar and Khed tehsil, which were affected by Cyclone Nisarga earlier this week. He promised villagers who suffered damages to houses and crops that speedy compensation will be provided to them.

Pawar also handed over cheques of Rs 4 lakh each as financial aid to family of those who lost their lives in accidents caused by the cyclone. Four persons, including two in a family, died in three different incidents.  ENS

Not allowed in stadium, so Barmy Army wants to be heard

From US to Pakistan, help pours in as India fights second Covid-19 wave

Himanta: Cong electoral ‘tsunami’ can come only in Bangladesh, not in riverine Assam